Another One Gabites the Dust!

Ursula is a character appearing in the Pokémon the Series: Diamond and Pearl, who is a rival of Dawn.

Ursula has cherry-coloured eyes and dark cream pink hair tied in lavender ribbons. Her casual wear is a white long sleeved mini-coat held by another identical ribbon on her chest, a sky blue dress that reaches her knees, white pantyhose, and white low-heel pumps. Her regular contest outfit is a long, black shirt with puffy cuffs, a black choker in her neck, a long dark red skirt and black flats. In the Grand Festival, she wore a different choker, a periwinkle dress-coat held by a large white ribbon, with a violet top and a soft blue skirt underneath.

Ursula is a determined Coordinator. However, she is also arrogant, viewing her rivals as underneath herself and as obstacles. When she loses a round, she dismisses her opponents off as that they won purely by luck.

Ursula competed in the Wallace Cup, but failed to win past the first round. Before entering Chocovine Town's Contest, she earned three ribbons.[1]

Hearing a dispute with her Gabite and Dawn's Pachirisu, Ursula stepped in to call her Gabite. As Pachirisu was attacking Gabite, Ursula was thinking Pachirisu wasn't well raised, and saw that her Gabite stepped on Pachirisu's Poffin. She offered Pachirisu a new Poffin, which it refused. Ursula then looked at Dawn, realizing the latter was a participant of the Wallace Cup, but felt she won by luck, rather than skill. Even so, she reminded her skills were superior, and ]claimed that Dawn would not win this Contest. During the first round of the Contest, Ursula sent Wormadam to shape an image of herself, earning her the victory. She then came to Dawn, claiming she was still superior, showing off her arrogance.

Ursula later faced Jessie and defeated her Carnivine, and eventually faced Dawn in the final round. Her Gabite attacked Pachirisu, who could only defend itself: its only offensive move that worked against Gabite was Super Fang. Pachirisu used Spark and Discharge, as well as its tail, to deflect Gabite's Dragon Claw or Stone Edge. It let Pachirisu use Super Fang, evading Dragon Rage to inflict damage on Ursula's Gabite. As Ursula lost the round, due to lack of points, she felt time was on Dawn's side this time. She stormed off, promising to face Dawn once more, though admitted she was good in her performance this time.[1]

Going to Daybreak Town, Ursula raised Plusle and Minun for that Contest. She encountered Dawn, showing she got four Ribbons so far. Dawn, however, didn't want to see Plusle and Minun out of her personal trauma. Ursula called her rude, to which Plusle and Minun tried to cheer her up. However, they electrocuted her by accident, causing Dawn to faint. As Dawn told her story to Ash and Brock about Plusle and Minun, Ursula overheard that story and later taunted Dawn. During the appeals round, Ursula used Jigglypuff and Gabite, the former spinning on the latter's fin, and earned her a victory. Ursula later visited Dawn, stating that the latter's performance was not inspiring. Dawn still reminded that she would fight fiercely for the final Ribbon, but was scared upon seeing Ursula's Plusle and Minun.[2]

Ursula battled Jessilina's Seviper and Yanmega. Her Plusle and Minun worked together, using Spark to negate their attacks and strike the opponent. As Ursula won the round, she overheard Dawn talking with Brock and Ash about how her combo was not working. Before the battle began, Ursula taunted Dawn by calling her "Dee-Dee", but Dawn calmed herself down, not giving in to her provocations. Ursula's Plusle and Minun faced Dawn's Cyndaquil and Mamoswine, who started off with flashy moves before moving on to attack. She had Plusle and Minun use Encore, trapping Mamoswine and Cyndaquil to use only Take Down and Swift, while her Plusle and Minun used Charge Beam and Spark.

As the attacks caused Dawn and her Pokémon's hair to become messy, she had Mamoswine and Cyndaquil attack each other to cancel the effect of Encore. Ursula became impressed, but continued on her attacks, until Dawn's combo worked: Ice Shard, powered by Flame Wheel, hit Plusle and Minun. Just when Ursula went to counterattack, time was up and Dawn won the Contest. Ursula was upset, stating that Dawn won because time was on her side again, and swore she wouldn't be so lucky in the Grand Festival. However, Jessilina entered the room and started arguing with Ursula.[3]

Ursula came to the site of the Grand Festival, where she startled Dawn by having her Plusle and Minun electrocute her a bit. Ursula took a glance at her opponents like Zoey, Kenny and Nando, but dismissed them all as children. During her appeals round, Ursula sent two Eevee to combine their Hidden Power and Iron Tail attacks. She tossed a Fire and a Water Stone to evolve them into Vaporeon and Flareon, amazing the audience as she passed onto the next round. She watched Dawn's performance, and wasn't impressed by her usage of Smokescreen, though Zoey scolded her. Ursula, however, promised that she would beat Zoey and Dawn, to prevent them from entering final round.[4]

Ursula watched Dawn's training, thinking her victory was based on luck than skill, believing she wouldn't win the next fight. In the next round, Ursula sent her Gabite and Flareon to battle Dawn's Pachirisu and Mamoswine. Dawn went to build up her attack, as her Mamoswine, powered by Pachirisu's Discharge, used Take Down on her Flareon. However, Gabite used Sandstorm, along with Flareon's Scary Face, to prevent Mamoswine from attacking. Ursula intensified her attacks, for her Gabite's Dragon Claw struck Pachirisu and Mamoswine's Ice Shard melted from Flareon's Fire Spin. With her Pokémon exhausted, Dawn had Mamoswine use Ice Shard around Pachirisu, who powered the combo attack with Discharge, and went to attack.

However, Gabite and Flareon dodged, so Pachirisu used the holes Gabite dug out to prepare itself. Using the combo attack once more, Mamoswine and Pachirisu defeated Gabite and Flareon. Ursula was devastated by this loss, and continued saying Dawn won by luck. However, she wanted to see how far luck would give Dawn an advantage, and bid farewell to "Dee-Dee".[5] Ursula remained behind, watching the battle between Dawn and Jessilina.[6] Ursula was watching the final round of the Grand Festival, between Zoey and Dawn.[7]

Ursula also appeared in the ending scene of the 13th Pokémon movie, along with her Plusle and Minun.[8] 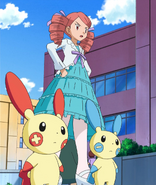 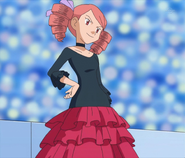 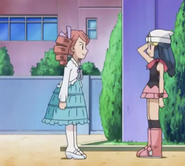