Gray
Undiscovered
Urshifu (ウーラオス, Uuraosu) is a dual-type Legendary Pokémon introduced in Generation VIII, whose primary type is the Fighting type. It is the mascot of Isle of Armor.

It is the evolved form of Kubfu.

Urshifu is a gray bear biped Pokémon with pastel yellow fingers, toes and mouth. It has two eyes with black pupils with fur extending from its kneecaps and running from its feet.

When Gigantamaxing, they turn white completely and their leotard changes to either red or blue depending on the form. Their eyes' pupils have disappeared and have an extra slash mark on top.

Urshifu's style and personality is determined by how it trained as a Kubfu.

Single Strike Style Urshifu prefers to battle without holding back its power. If enraged, it will attack the foe with full force with straight line directed fists.

Rapid Strike Style Urshifu prefers calmly observing the opponent and their strength while evading hits. It uses flowing movements to dodge an opponent's attack before overwhelming them with rapid strikes, like Mienshao.

Gigantamax Single Strike Style Urshifu has been called "the very embodiment of rage" and "a divine emissary that banishes evil spirits with its fury."

Rapid Strike Style Urshifu maintains a stance in a calm manner while in Gigantamax form. Opponents who face it may either feel greatly agitated or experience a sense of relief, as if freed from evil spirits.

Their ability, Unseen Fist, allows them to bypass moves like Protect, allowing them to always strike their foe. Wicked Blow and Surging Strikes, their signature moves, have high crit ratios and ignore stat changes of the target.

When they Gigantamax, their G-Max Moves, G-Max One Blow, and G-Max Rapid Flow, can bypass Max Guard and other protection moves.

Urshifu evolves from Kubfu by finishing the trial at either one of Tower of Two Fists: Tower of Darkness or Tower of Waters.

Urshifu draws upon the idea of tamed bears, specifically bears who were taken as cubs to be trained and raised in human society. Being a Fighting-type Pokémon and a "martial artist" draws upon a lot of lore of bears and the martial arts; high ranked martial artists sometimes fight bears as a means to test their skill in extreme situations, while the term kuma taiji, or "bear conquest", is sometimes used to also refer to demonic exorcism; this may explain Single Strike Style's Dark typing.

Within astronomy and astrology, the Big Dipper in the west is sometimes referred to as Ursa Major, as imagery sees the constellation as a great bear, while in the east, the Big Dipper was traditionally known as the celestial palace of the heavens, with its handle end star, Alkaid, known as Hagunsei, or the Military Breaking Star, or The Sword, as it was believed the armies of heaven and the gods of death quartered there, and was ominous for warriors to face the northwestern direction because of this. Into the Meiji Era, when western and eastern thought met in 19th Century Japan, the Big Dipper saw another interpretation by its English adopted wordplay, being a "dark corner" akin to a bear's den.

Each of Urshifu's style forms represents Yin and Yang, and into martial arts, the philosophy's application into the division of "hard styles" and "soft styles", as represented with Single Strike and Rapid Strike. Hard styles are said to focus on external focuses, that of raw strength and power, explosive speed, head on intercepting countering blows, and direct confrontation, while Soft styles are said to focus on internal focuses, including the control of the natural flow of the body with the mind, accuracy, mental acuity, concepts like using a foe's own movement and energy against them, and drawing out weaknesses; in short, as Rapid Strike Style Urshifu represents, the way of martial artist philosophy: "be like water". To Japanese martial arts philosophy, the concepts of satsujinken ("sword/fist that kills") and katsujinken ("sword/fist that gives life") also tie into these philosophies as well, respectively; satsujinken focuses on controlling a bout's tension to escalate to where a single blow is all that is needed for victory, while katsujinken focuses on cancelling out tension by meshing with a foe's energy and using it against them upon finding a weak point to disarm them. This would also presumably perhaps explain their dual typing; Dark coming from the intent to "kill" or instantaneously annihilate all opposition, Water also capable of "giving life" as much as it is able to overwhelm and overpower with many forms and rhythms.

Urshifu is a combination of 'ursa', Latin for 'bear', and 'shifu' (Onyomi Japanese/Chinese adapted Japanese term for "master"). 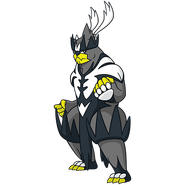 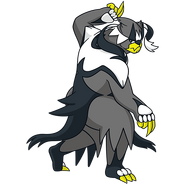 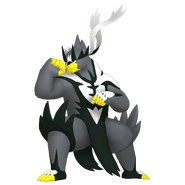 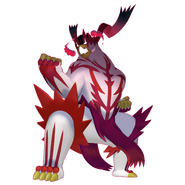 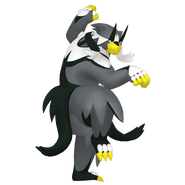 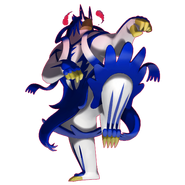