Ursaluna is a large, stout, quadrupedal dark brown bear Pokémon with a brown-grey pelt covering the large hump on its back, feet, and round tail. The brown-grey pelt has 9 rectangle brown spikes on its back and four spikes around the head. The front feet have five claws each while the back feet have three claws. The face is brown with a light-yellow circle at the center and a light-yellow snout with a small black nose.

Their stronger limbs help them wade through boggy pits and mires as they search for food. Ursaluna also spend a significant amount of time looking for more peat to bolster their armor. When Ursaluna stand on their hind legs, they shift their peat to balance themselves much like other Pokémon use their tails. They can be found in peatlands and boreal wetlands.

In Hisui, Ursaluna were protectors of the peatlands from which people gathered fuel. Taking too much would anger the resident Ursaluna, so gatherers took great care to moderate their harvests and sometimes even performed small rituals to pay their respects to the Pokémon.

Ursaluna are known to be good at searching for stuff by digging into the ground.

These shell-like coverings are actually made of compacted peat and possess excellent shock-absorbing characteristics. Ursaluna can in fact manipulate this peat to cover vulnerable sections of their bodies, making them deceptively adaptive during combat. In the rare event that these hulking Pokémon require speed, they can even redistribute their peat to optimize for agility.

Ursaluna is evolved from Ursaring when it is exposed to a Peat Block during a full moon.

Ursaluna might be inspired by the Ussuri brown bear, which is revered as the "God of the Mountain" (Kim-un-Kumuy) in Ainu language. Its Ground typing may be inspired by the fact that some bear species, including the Ussuri brown bear, sometimes live in dug out burrows or dens. It may also have traits of Asian black bears, which are known for the moon-like pattern on their chests, thus explaining Ursaluna's cloud-covered full moon pattern on its head.

Its categorization, the Peat Pokémon, and Ground type might be due to peats distribution in Hokkaido, where it is considered a special kind of soil. 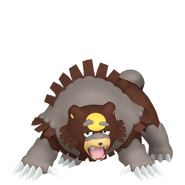