Before his death on August 13, 2018, Ishizuka managed to finish his last voice recordings which ended in the episode SM092, with Kenyu Horiuchi as his successor for Professor Samuel Oak and Principal Samson Oak, starting from SM093. It is revealed that his last voice role in Pokémon-related medias was none other than Incineroar for Super Smash Bros. Ultimate. 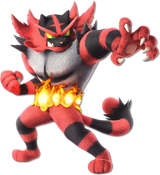