VII
Ultra Space is a network of several different dimensions accessible though a dangerous portal, the Ultra Wormhole. It is the home of the Ultra Beasts, some other people and Pokémon; each species of inhabitant of Ultra Space has its own dimension to live.

Ultra Space is an interdimensional spatial realm filled with crystalline meteoroids and populated by Necrozma and multiple instances of members of the Cosmog line. It links to a number of different universes and dimensions through Ultra Wormholes - while they may naturally occur, they are more commonly deliberately opened up by the Light trio.

Ultra Deep Sea is the homeworld of the Ultra Beast Nihilego. It consists of deep-blue rocks and giant stalks, similar to trees. In the Lost Thunder TCG set, it is revealed that plant-life such as flowers can grow there.

Ultra Jungle is the homeworld of the Ultra Beast Buzzwole. Its accessible in Pokémon Ultra Sun only. It consists of a jungle-like area that contains volcanoes and trees that are shaped like flexing muscles.

Ultra Desert is the homeworld of the Ultra Beast Pheromosa. Its accessible in Pokémon Ultra Moon only. It consists of a white sand desert filled with blue crystals and rocks.

Ultra Plant is the homeworld of the Ultra Beast Xurkitree. It consists of deep-blue platforms with wire-like platform. Gloomy, black clouds loom over the land, constantly striking thunder. Thunder Stones are shown to be able to grow there.

Ultra Crater is the homeworld of the Ultra Beast Celesteela. Its accessible in Pokémon Ultra Moon only. It consists of rocky terrain, covered is green moss and red spikes. Steam burst from the ground and structures similar to Celesteela can be found.

Ultra Forest is the homeworld of the Ultra Beast Kartana. Its accessible in Pokémon Ultra Sun only. It consists of a forest biome filled with Kartana-shaped leaves and small lakes. Several other human inhabitants live in this dimension.

Ultra Ruin is the homeworld of the Ultra Beast Guzzlord. It consists of ruins that are similar to Hau'oli City (scrambled text and posters suggest this is a future when Guzzlord eats everything in Alola). The music in this world, when played backwards, is a smooth mix of the music that plays when in Hau'oli City. In the anime, this is shown to be an alternate universe in which Alola ends up in an apocalyptic state and everything is in ruins.

Ultra Megalopolis is the homeworld of the Ultra Recon Squad and some other people, the Ultra Beast Poipole and its evolution Naganadel, originates from this world. Ultra Megalopolis is a world without light, that was stolen by the Legendary Pokémon Necrozma, where the same also lives on it, imprisoned on the top of Megalo Tower.

This dimension is the homeland of the Ultra Beasts Poipole and Naganadel, it appeared in the anime in SM089. It also appears in the Forbidden Light TCG with Naganadel. It is shown to be swamp-like, consisting of plants that are similar to moss and ferns. There are also small stone walls, aged trees, and vines containing red spines.

This world, introduced in the Lost Thunder TCG, consists of a dark sunset-like sky filled with purple and orange. The ground is rocky and rough and large trees grow from the ground. These trees contain no leaves and have swirled branches growing from their tops.

This world, introduced in the Celestial Storm TCG, consists of flat and grassy plain and a world very similar to Earth. Its is shown to have a cloudy blue sky, lush green trees, rolling hills, and giant volcanoes, constantly erupting steam.

This world, is the home of an unseen Ultra Beast, it was introduced in SM146.

In ancient times, Necrozma's light shone through the Ultra Wormholes connecting to various worlds such as the Ultra Beasts' homeworlds, Ultra Megalopolis, and the Pokémon world, primarily over the Alola region. However, following an incident with the residents of Ultra Megalopolis years ago, Necrozma's body was damaged and it lost the ability to produce light, the agony caused by its injuries sending it into a berserk state where it constantly hungered for light. As a result, it was imprisoned in Megalo Tower. Kukui state that the Sparkling Stones found across Alola and fashioned into Z-Power Rings are the lost pieces of Necrozma's body.

At one point in the past, a Solgaleo/Lunala arrived in Alola from Ultra Space and won a fight against the guardian deities. Solgaleo/Lunala bestowed the Tapunium Z to the guardian deities, and in conjunction with a Lunala/Solgaleo produced several Cosmog that were revered by the region's monarchies and protected by the four tapu, before the Legendary Pokémon departed back to Ultra Space.

At another point in the past, Necrozma appeared in Alola and stole its light, covering the region in darkness. Necrozma clashed against the guardian deities, who fought to defend Alola. During that time, Necrozma also absorbed Solgaleo/Lunala to become its Dusk Mane/Dawn Wings form. With the assistance of a youth, Z-Crystals and Sparkling Stones, the deities banished Necrozma, freed Solgaleo/Lunala, and reclaimed Alola's light

Ultra Deep Sea (named Ultra Space) can be accessed after Nebby evolves into Solgaleo or Lunala. It is the home of many Nihilego and it's the local where Lusamine can be faced for the last time. After Lusamine is defeated, it is impossible to return to Ultra Deep Sea by legitimate means. 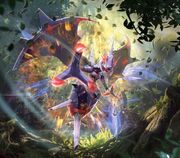