Tyson is one of Ash's friends who lives in Mauville City. He won the Hoenn Tournament as first place by defeating Ash.

Tyson found Meowth in a weak condition after a battle with a Persian, and decided to help it. Due to being quite hurt, Tyson outfitted it with boots and a hat. It became a loyal companion after that, though it has a bitter hatred of Persian to the point that it would severely injure them. It was strong enough to evolve into a Persian, but it refused to do; Tyson assumed Meowth was too prideful to do such a thing.[1]

At Ever Grance City, seeing the heroes getting attacked by Murkrow, Tyson had Meowth attack Murkrow, causing them to disperse. The heroes thanked Tyson. The latter noticed May's handbook, thinking they were going to the same restaurant as he was, Noodle Nosh. There, Tyson and the heroes got to know one another, as they commented Brock's food. Tyson admitted as he was traveling to battle Gym Leaders, he was also looking for good food. May was quite fascinated, thinking of Tyson as his soulmate, and proposed to write a cookbook. Looking at the time, Tyson quickly stormed away to the Pokémon Center, for he was one of the torch bearers. He made it in time to meet Charles Goodshow, the president of the League, and took the torch and ran to the stadium.

He made it to the stadium, where he passed on the torch to Officer Jenny and Nurse Joy for safekeeping. However, two imposters took the torch, who later revealed themselves to be Team Rocket. The heroes went with Tyson to confront them, though the latter blamed himself for letting the torch be stolen right under his nose. As Team Rocket's Meowth accidentally fell down with the flame, Tyson's Meowth obtained that flame, whereas his Metagross pulled Ash down from their balloon (who tried to recover the flame). After Team Rocket was defeated, Charles praised both Ash and Tyson, who admitted that they were powerful Trainers, too, and expected great battles from each other.[2]

As Team Rocket had Ash and Morrison fall into a hole to steal their Pokémon, Tyson and Meowth appeared, and the latter blasted them off. Ash and Morrison thanked Tyson, who told the latter that he had until 5 to register for the League. Upon Morrison doing so, Tyson wished both Trainers luck in their battles. The next day, Tyson meditated with Meowth before the upcoming match. In the first round, Tyson's Meowth battled a Trainer's Persian. While Meowth did defeat Persian with Thunderbolt, it went to even attack it further, but Tyson stopped it. In evening, Tyson spoke with ohers about Meowth's behavior, stating that it was once badly hurt by Persian and harbored a grudge towards them.[1]

Tyson watched the battles with Max, Brock and May, and ate the cheeseburgers with the latter. He later battled in the next round and won.[3] Tyson used Donphan (who fainted) and a Sceptile to battle an Aggron. Aggron used Metal Claw, to which Sceptile used Detect to protect itself, and fired a Solar Beam to defeat it. Since the next match would be in two days, Tyson visited restaurants with May instead.[4] Tyson used Meowth to battle a Rhydon and won. During the evening, he had a pizza with his friends, where he learned Ash would face Morrison in the next round.[5]

Tyson defeated his next opponent, his Sceptile easily defeating a Rhydon. The group had dinner together, where they found out Tyson would be Ash's next opponent. The two Trainers simply promised to have a great battle. A moment later, outside, Tyson sent all of hsi Pokémon out, giving them a speech to increase their morale for the upcoming battle, and started a training with all of them. The next day, facing each other, Tyson and Ash sent Sceptile and Glalie, respectively, starting their battle.[6] The collision defeated Pokémon, so Ash sent Torkoal and Tyson sent Shiftry. Despite the latter evading Flamethrower and inflicting damage to Torkoal with Mega Kick and Shadow Ball, it was defeated when Torkoal jumped on it to slam it to the ground.

Tyson then sent Hariyama, whose Thick Fat reduced damage from Flamethrower, and slammed Torkoal with Brick Break, defeating it. After a break, Tyson sent Hariyama to battle Ash's Swellow. Hariyama struck Swellow with Focus Punch, but was defeated by a single Aerial Ace. Tyson then sent Donphan, whom Swellow countered its Rollout by pressing its legs to its ears. It then defeated Donphan by dropping it on a rock. Harrison's Metagross, however, used Psychic and Hyper Beam to quickly defeat Swellow, prompting Ash to send Grovyle. Grovyle fired Bullet Seed on its scar, inflicting serious damage. As it went to use Leaf Blade, Grovyle was hit by Meteor Mash and fainted, forcing Ash to send Pikachu. Pikachu evaded Metagross' attacks, and used Iron Tail and Thunderbolt to quickly defeat it. Tyson then sent Meowth as his final Pokémon.

The two were evenly matched, using Thunderbolt and Iron Tail to counter each other's attacks. However, Pikachu was too exhausted, and once the two Pokémon suffered from Iron Tail that they dealt to each other, Pikachu fainted. Tyson won the battle, but he nevertheless thanked Ash for this great match. Eventually, Tyson fought his way to the top and became the Hoenn League Championship, receiving Charles Goodshow's Cup trophy as an award.[7] In the end, Tyson and Meowth departed away with Morrison, bidding farewell to the heroes as they returned to their hometowns.[8] 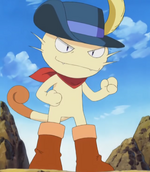 Winner of Ever Grande Conference