Tyrunt (チゴラス, Chigorasu) is a Rock/Dragon-type Fossil Pokémon introduced in Generation VI. It can be revived from the Jaw Fossil. It is Amaura's counterpart.

Tyrunt is a small reptilian dinosaur-like Pokémon that resembles a young Tyrannosaurus Rex. Its rocky scales are brown, its back is arched, and it has a gray lower jaw and underbelly. Tyrunt has a very large head and a gaping maw with four sharp fangs. Its arms and claws are tiny compared to its size. It has a fringe of white spiny scales around its neck, two orange spikes atop its head, and one orange spike on its tail. It has large and powerful hind legs with three long, sharp claws on each.

Tyrunt have extremely powerful jawbones that can crunch with enough pressure to flatten automobile parts. These strong bones make their heads very heavy, so it is very difficult for Tyrunt to stand upright; consequently, they often hold their heads very close to the ground. Tyrunt are extremely finicky Pokémon; they will throw wild tantrums when they are displeased by something. Trainers of Tyrunt often report that their Pokémon will enter property-destroying fits of anger after slights as minor as being served a food that they dislike. Commonly characterized as spoiled, they do not play well with others and often hurt smaller Pokémon when roughhousing. Tyrunt also despise doing practically anything on their own; in the wild, Tyrunt were cared for entirely by their parents, who would bring them food, bathe them, and even lull them to sleep. Consequently, orphaned Tyrunt rarely survived for long without their parents.

Its ability, Strong Jaw increases the power of biting moves by 50%.

In order to obtain Tyrunt, it must be resurrected from the Jaw Fossil. Tyrunt evolves into Tyrantrum starting at level 39 during the day.

Tyrunt comes from tyrannosaurus and runt. 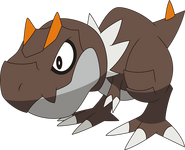 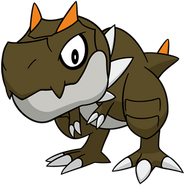 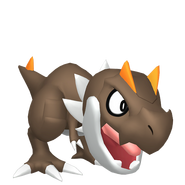 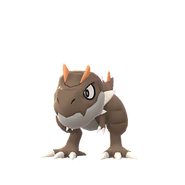