Tyrantrum has immense jaw strength, allowing it to easily rend a metal plate to shreds. During the time it roamed the Earth, Tyrantrum was considered to be unbeatable.

Many scientists theorized that Tyrantrum may have feathers growing out of its body.

Tyrantrum is based on a Tyrannosaurus rex. Its appearance and behavior are a pun on Tyrannosaurus rex's name, which means "tyrant lizard king". It could also draw some inspiration from Terry from Dinosaur King, a SEGA arcade game.

Tyrantrum is derived from "tyrannosaurus" and "tantrum". 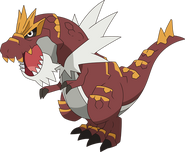 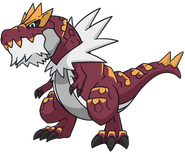 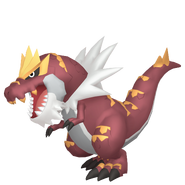 Add a photo to this gallery
← Tyrunt | Tyrantrum | Amaura →
Retrieved from "https://pokemon.fandom.com/wiki/Tyrantrum?oldid=1225973"
Community content is available under CC-BY-SA unless otherwise noted.