During its development, it was known as Type: Full prior to the project's failure.

Type: Null is a chimeric-looking quadruped Pokémon combining body parts from several different creatures. Its body is black and catlike, with three-toed paws on its hind legs while its front legs are green and resemble an insect's or bird's. It has purple scales on its upper hips, its tail is a blue forked fin with a gray membrane, and a mane of gray fur hangs around its neck. Its head is mostly obscured by a metallic helmet with a ring resembling that of Arceus around the neck and a silver crest on the top. Its gray eyes are, however, visible through a pair of openings on the helmet.

Type: Null evolves into Silvally when levels up with high Friendship.

Type: Null can only be obtained is via Gladion in the Observatory Room at Aether Paradise, after becoming champion.

Type: Null first appeared in SM037: Rising from the Ruins!, where Gladion summon it out of its Poké Ball. Gladion's Type: Null later evolves into a Silvally.

Type: Null may be based on a gryphon or a chimera. It also has many similarities to the dragon of the Ishtar Gate in the city of Babylon, such as the feline and dragon-like legs, dragon-like shape, and crest on its head. The ring surrounding its helmet resembles the one surrounding the torso of Arceus. It may also draw inspiration from Frankenstein's Monster, especially the bolts on either side of its head. Backstory-wise, it may also be based on the EVA units from Neon Genesis Evangelion, both being cyborgs designed to fight bizarre, incredibly powerful creatures (the Ultra Beasts in Type: Null's case, the Angels in the EVA units' case), both having to wear devices that prevent them from losing control of their power (the mask in Type: Null's case, the armor in the EVA units' case), and the three instances of Type: Null created possibly referencing the three main EVA units (Unit-00, Unit-01, and Unit-02).

Type: Null comes from type and null (having no legal or binding force, nothing). 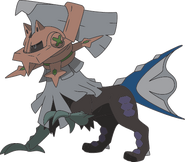 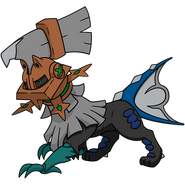 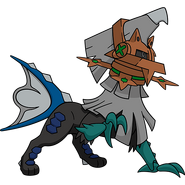 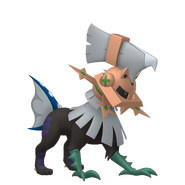