Twinleaf Town is the player character and the rival's hometown in Pokémon Diamond and Pearl and Pokémon Platinum. It has four houses, the house in the southeast corner is the player character's house. The house located in the northwest corner is the rival's house. Twinleaf Town also has a small lake situated at the very bottom. It is also the nearest town to Lake Verity.

"You have just watched a show on the Red Gyarados." Head downstairs and your Mom will tell you that your rival is looking for you. She also warns you not to go into the tall grass. Now head outside and go to the north west (top left) house — your rival's house. 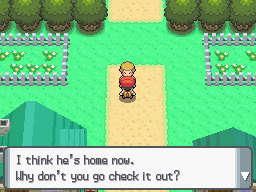 You cannot access to Route 201 unless you have spoken to your rival.

Head to your friend's house located at northwest of Twinleaf Town. When you reach the entrance, your friend will crash into you. Then he went off and entered inside the house again to take the things he had forgotten. You enter the house and go upstairs, you will see him packing his things. He will then run downstairs again. Meet him at Route 201.

Then walk to the left of the Route 201 and enter Lake Verity. See Lake Verity if you want to continue the story.

After battling Pokémon and meeting Professor Rowan and his grandchild, you will return home. Upon arriving home, your mother tells you to meet Professor Rowan at Sandgem Town, and she gives you the Running Shoes. Now head to Route 201 and began your journey to Sandgem Town!

Head home to tell your Mom about the big quest you are going to embark on. After telling your Mom about the quest you will be taking she gives you a Journal to record things that happen to you along the way. Right after you receive the Journal from your Mom, your rival's mother will enter. She forcefully asks you to take a left behind parcel to your rival. Head to Jubilife City to give your rival the parcel.

Like most locations from the Pokemon games, Twinleaf Town is much bigger in the anime. Five notable trainers originate from Twinleaf: Tower Tycoon Palmer and his hyperactive, fine-happy son Barry, retired Top Coordinator Johanna and her daughter Dawn, and Dawn's friend/rival Kenny. Because of their respective successes, Palmer and Johanna are the two most famous residents, with Dawn in third off a runner-up in her first Grand Festival (fell to her main rival in Snowpoint City's Zoey), the furthest into their respective top competition reached between herself, Barry (defeated by Paul, who lost to Ash, who fell to eventual champion Tobias despite knocking out not only Darkrai but also a Latios), and Kenny (knocked out in the appeal round).

First floor of the player's home

The player's bedroom upstairs
Add a photo to this gallery
Retrieved from "https://pokemon.fandom.com/wiki/Twinleaf_Town?oldid=1113863"
Community content is available under CC-BY-SA unless otherwise noted.