Turtwig (Japanese: ナエトル Naetoru) is the Grass-type Starter Pokémon of the Sinnoh region.

Turtwig is a Pokémon and appears to be a green-ish Pokémon with a small twig on its head. On the twig are two green leaves. It has large yellow eyes and its face is oddly shaped. On the bottom of the face there is a yellow mouth in an obtuse shape. Also on its face it has two tiny nostrils. It has four small stubby feet, so it can't move as fast, and on the bottom of its feet are an obtuse area of yellow towards the bottom of the feet. It also has a shell on its back. The shell is brown with black line on the bottom and a few stripes.

Turtwig is docile but somehow over-affectionate, as it sometimes might bite its trainer's head as a way to express its love. It can be both insensitive and bashful or outgoing and protective.

If Turtwig doesn't drink enough water, the leaf on its head withers, thus it must live by the riverside.

Turtwig can be found at the rivers near dense forests, but it is a rare instance.

Turtwig is used by Ash in the Sinnoh Region. It could learn Tackle, Withdraw, Absorb, Razor Leaf, Curse, Bite, Mega Drain, Leech Seed, Synthesis, Crunch, Giga Drain, and Leaf Storm. Later in the series, Ash's Turtwig evolved into Grotle, but this made it hard for Ash to train it, due to a lack of speed. Afterwards, Paul's Torterra teaches Grotle how to fight with reduced speed. Ash later uses this strategy there on. It soon evolves into Torterra at Sunyshore City during another battle with Team Rocket.

It reappeared in the Pikachu short airing along with the 15th Pokémon movie.

Known Trainers with a Turtwig

Turtwig is based on a baby turtle.

Turtwig's name is a portmanteau of "Turtle" and "Twig".

Turtwig's Japanese name is Naetle, nae meaning seedling as Turtwig has a seedling growing from his head. 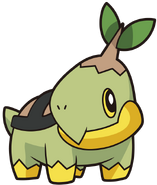 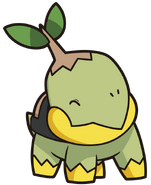 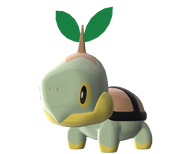 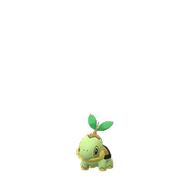