Turtonator (バクガメス, Bakugamesu) is a fire/dragon-type Pokémon introduced in Generation VII. It is exclusive to Pokémon Sun.

Turtonator is an anthropomorphic mata mata (freshwater turtle). It has a glaring expression and a spiky head covering, as well as a cannon-like snout. Its back resembles an explosion with many spikes, resembling debris while its limbs are short and stubby. Its tail resembles a Z-Crystal meant for a Z-Power Ring.

It lives on volcanoes.

It hides in rocks and ambushes unsuspecting prey. If a prey steps on its shell, it smacks its shell to cause an explosion.

This Pokémon has excellent defensive capabilities. If any Pokémon or enemies attack it, the spikes on its shell will start sparks and blow out the explosion from the hole in its belly. But once you gain its trust, its spikes won't explode. The droppings that Turtonator leaves behind are highly explosive.

Turtonator's natural diet of sulfur results in its explosive shell.

Turtonator does not evolve.

Turtonator appears to be based on a Mata mata, a freshwater turtle from South America. It may also draw inspiration from cannons and land mines. It being a bipedal, draconic turtle-like creature with a spiky shell and fire powers may also be a reference to Bowser from the Super Mario series. Its Dragon type may be based on the Tarasque and Dragon Turtle.

Turtonator is a combination of "turtle" and "detonator". Its name also has the word "ton" in it.

Its Japanese name, Bakugamesu, is a combination of 爆発 (bakuhatsu, explosion) and 亀 (kame, turtle). 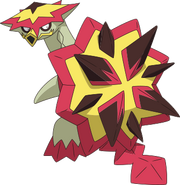 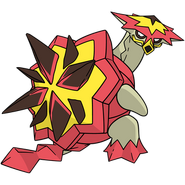 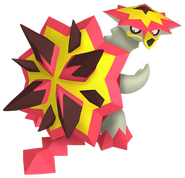 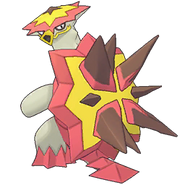