Tupp is a recurring character appearing in the Sun & Moon series. He is a member of Team Skull.

As a child, Tupp and his Alolan Grimer were once the center of attention to a bunch of fan girls. Sadly it was short lived when Ilima and his Eevee passed by causing the girls to direct their attention to them. In an attempt to win them back, Tupp try to look cool by changing his clothes, but the girls still paid attention to Ilima. Because of this, Tupp has developed a deep hatred of Ilima over the years. At some point, he chose to join Team Skull. His desire for revenge for being an outcast during his school days attracted him to the group, where he is now flocked by his fellow Grunts.

Tupp debuted in Alola to New Adventure!, where he, Zipp, and Rapp challenged Kiawe to a battle with his Charizard on the line. Tupp and the other Grunts took on his Turtonator nine against one, until Ash came to assist Kiawe with his Pikachu. After a short battle, Tupp and his partners were defeated by Turtonator's Z-Move Inferno Overdrive, forcing them to retreat.

In Young Kiawe Had a Farm!, Tupp and his teammates attacked Kiawe and Ash, seeking revenge for their previous defeat. However, the trio was quickly defeated by Pikachu's Gigavolt Havoc.

In Alolan Open House!, Tupp and his teammates visited the Pokémon School, where they stole some Ride Tauros and started wreaking havoc at the school. They were soon confronted by Delia, who took the Grunts on using Ash's Litten. When Ash and his classmates arrived, Team Skull was soon sent off again by Pikachu's Gigavolt Havoc.

In A Team-on-Team Tussle!, Tupp and his teammates encountered Team Rocket for the first time. Both teams fought over a Darkinium Z, which Team Rocket managed to take.

In A Glaring Rivalry!, Tupp had a battle with Gladion but was quickly defeated by Lycanroc's Stone Edge.

In Turning Heads and Training Hard!, Tupp learned about Ilima's return to the Pokémon School. In response, he led a group of Team Skull Grunts there to exact his revenge on him. However, not only were the Grunts easily defeated by Ilima's Eevee, but the female Grunts in the group fell in love with Ilima, making Tupp even angrier.

In Real Life...Inquire Within!, Tupp and his teammates confronted Ash during an attempt to take Poipole. They had a battle, which eventually ended when Zipp's Garbodor's arm became blocked and released a horrible smell.

In The Shape of Love to Come!, Tupp and his teammates encountered Mina, a wandering artist. When Rapp demanded that Mina give up her Ribombee, Mina accepted, but only if they could best her in a drawing competition. Though Mina liked the Team Skull Grunts' drawings enough that she wanted to call it a tie, Tupp was angered by her criticism of his poor drawing and instead decided to battle her. Mina was assisted by the timely arrival of Ash, who defeated Tupp's Salandit with Pikachu.

In We Know Where You're Going, Eevee!, Tupp and Rapp fought over a wild Eevee as the former wanted to use it to make himself popular with girls while the latter wanted Eevee because she found it cute. After being rescued by Ash's Pikachu, Eevee teamed up with Lana's Popplio to send the trio blasting off.

In That's Some Spicy Island Research!, Tupp and his teammates went to Poni Island under Plumeria's orders. They had stolen radishes from Hapu's field and were using them to lure and capture a number of Sensu Style Oricorio when they encountered Ash. They sent their Pokémon out to battle Ash, but were stopped when Hapu arrived. Hapu battled Team Skull using her Mudsdale and quickly defeated them. Plumeria showed up, unhappy with their efforts, and ordered them to follow her back.

In The Dealer of Destruction!, Tupp and his teammates arrived at the Shady House and told Guzma about Professor Kukui's announcement of the Pokémon League. Tupp then accompanied Guzma, Plumeria, and his teammates to Melemele Island, briefly encountering Team Rocket before showing up at the Pokémon School to get Kukui's attention.

In League Offenders and Defenders!, Tupp and his teammates arrived at the Manalo Stadium to try and destroy the Pokémon League for Guzma's sake without telling him what they were doing. Their efforts were thwarted by Ash, Kiawe, and Hau, who easily defeated their Pokémon. Afterwards, Guzma and Plumeria arrived and scolded the Grunts for their failure.

In Getting Down to The Ire! and The Wisdom Not to Run!, Tupp cheered for Guzma during his battle against Ash and spoke to him following his loss. Though Guzma was ready to disband Team Skull, Tupp and the others were so fired up by the battle that they wanted stay by his side and learn to battle as well as he did. In Thank You, Alola! The Journey Continues!, Tupp was briefly seen battling Guzma and his Golisopod for training. 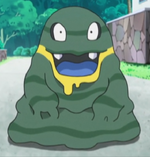