Tsareena is a bipedal Pokémon. Its face and lower torso are white, while its eyes and lashes are magenta. A muffler-like design covers its neck. It has slender arms and legs that are the same color as her eyes. On its head, three long leaves extend to the lower half of its leg, with a bigger leaf flipping near its crown, which is colored similarly to its overall color scheme. The backs of the leaves have small circular yellow patterns.

Tsareena are generally prideful Pokémon and when one encounters strangers who are ill-willed or evil, they will instantly punish them with their famously formidable kicks and even cackle at their defeated opponents as a way of gloating. In captivity, they also show signs of despise towards Trainers whom they regard as weak by giving out strict death stares if they are ordered to use an ineffective move or towards ones don't have an intimate bond with.

In their evolutionary family, only the strongest Steenee can evolve under the blessings of its kind. Upon evolving, Tsareena will gain excessive strength that helps them to master their leg power even better than Steenee. The majority of them take up the responsibilities of guarding and protecting other Steenee and Bounsweet, even becoming aggressively defensive to outsiders (especially bird Pokémon) that they consider dangerous to fellow Bounsweet. Some may describe Tsareena as merciless, since they laugh boisterously after cruelly stomping and defeating their foes with their curvy and sharp legs, which inflict both physical and psychological agony in an everlasting way to the victims.

Tsareena can utilize their legs better than their pre-evolution, performing brutal kicks through elegant and poised movements. They can confuse opponents through their alluring aroma before delivering a devastating blow.

However, if the "crown" of Tsareena is being touched too long, they will permanently lose their power.

Mallow's Steenee evolves into Tsareena in All They Want to Do is Dance Dance! whilist rescuing everyone from Team Rocket.

On the other side, the fact that Tsareena's whole evolutionary line is all female is based on the fact that mangosteen plants only have female flowers. Tsareena's motif is also a reference to the mangosteen's title as "The Queen of Fruits".

Tsareena comes from the words tsarina (Russian for princess) and mangosteen, the real-life berry that every member of her evolutionary line is based on. It may also incorporate the words mean or demean, referring to her personality and love of humiliating her foes.

Its Japanese name, Amaajo, can be translated as "Sweet Queen." 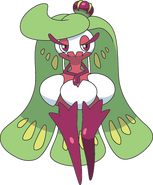 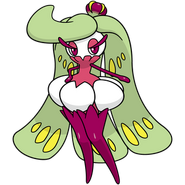 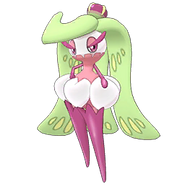 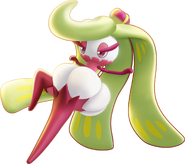 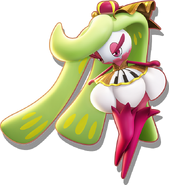