Trumbeak resembles a medium-sized woodpecker. Like its pre-evolution, it is black in color with white feathers with a few differences: the red mark on its forehead is gone and a red zigzag marking is around its neck. It also has grey marking on top on its eyes, resembling eyebrows. Its beak is orange with a black tip and a red band wrapped around it. It has blue eyes and grey feet.

Trumbeak are diligent and practical, and they are also loving caretakers who look after Pikipek with Toucannon. Be that as it may, Trumbeak is hated by humans on account of its noisiness. They are infamous for their loud, bugle-like calls as well as their lack of regard for quietude.

The tips of their beaks are flexible and can bend backwards like “lips”. This allows them to buzz air through them in order to create their signature trumpeting. Though Trumbeak do not live together in the wild, they are not territorial towards others of their kind. In fact, they communicate with one another through their raucous calling. Plants in Trumbeak habitats often have hard-shelled seeds that can withstand firing, and Trumbeak prefer these seeds because they are more effective at deterring attackers. In the late spring, male Trumbeak will begin to call even more loudly and cacophonously as they try to attract mates, much to the chagrin of people and other Pokémon alike.

Trumbeak's beak is so flexible, it can bend it in a puckered lips motion. This allows it to produce a variety of sounds and fire off seeds, which came from the berries it eats, at its enemies. The berries it shoots out later grow into new plants.

Trumbeak is based on a woodpecker, with some similarities to a toucan. Trumbeak's beak motions also resemble that of brass instruments, mainly a trumpet or bugle.

Trumbeak comes from trumpet (referring to the loud trumpeting it makes) or rostrum (a beak-like protrusion on an animal) and beak. 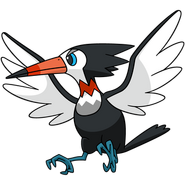 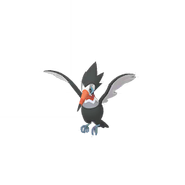