This Conkeldurr is a Fighting-type Pokémon owned by Trip.

Timburr fought against Ash's Oshawott. Oshawott started with Aqua Jet and while Timburr was using Strength, Oshawott missed his target. The battle was paused, as Trip showed photos of Ash how Oshawott closed his eyes while using Aqua Jet. Afterwards, Timburr used Strength to block Water Gun and Low Sweeped Oshawott. Oshawott attacked with Razor Shell, which made Timburr leave its wooden pillar behind to attack with Dynamic Punch. The Razor Shell won, and Timburr was knocked out.[1]

At the first round of the Don Battle Tournament, Timburr was revealed to have evolved into a Gurdurr, where it battled against Cilan's Dwebble. Gurdurr managed to evade Dwebble's Slash and X-Scissor attacks, then retaliated and even cracked Dwebble's shell with Rock Smash. However, its second attack of Rock Smash failed when Dwebble retreats but used a powerful Stone Edge to score a direct hit. Gurdurr tried to use DynamicPunch to hit Dwebble, but it was too fast for it to land an attack every time it dodged. So far, Gurdurr tried to swing its steel beam to knock Dwebble off but it was lured in when Dwebble jumped up and used Shell Smash to increase its attack power, followed by Rock Slide to land on top of Gurdurr. After being separated from his steel beam and imprisoned by Rock Slide, Gurdurr tried to reach its steel beam but was defeated by a single Slash attack.[2]

Trip arrived with Conkeldurr in at the Clubsplosion Tournament, where it was revealed to have evolved from Gurdurr. Trip managed to belittle Ash, who tried to reply but was intimidated by Conkeldurr.[3] Conkeldurr battled Bianca's Emboar in the preliminary matchups. He easily blocked Emboar's learned attacks, Arm Thrust and Hammer Arm. Emboar's launched Flamethrower, which Conkeldurr blocked by swinging its concrete pillars, then used Strength to hit Emboar to the ground. It then used Bulk Up, followed by Rock Tomb, to both damage and trap Emboar. Emboar tried to break free with Arm Thrust but failed. To finish Emboar off, Conkeldurr launched a powerful Stone Edge on an exhausted Emboar to seemingly end it.[4] Fortunately for Bianca, Emboar survived the hit by catching the stones from the Stone Edge, then threw them back at Conkeldurr by using Fling. Conkeldurr still tried to control the battle, but Emboar snatched both of Conkeldurr's concrete pillars. Conkedlurr was then easily defeated when Emboar threw the pillars back with Fling again.[5]

While fighting Brycen's Beartic, Ash had his Krokorok throw Stone Edge rocks at Beartic. Iris and Cilan recalled Bianca had her Emboar use a similar strategy to attack Trip's Conkeldurr.[6] 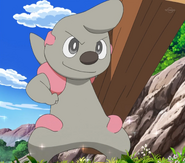