Blaze (not yet activated)
Drought (as Mega Charizard Y)

From Professor Sycamore, Trevor chose Charizard, as a Charmander, as his starter Pokémon. Unlike Trevor who is shy and cautious, Charmander is very energetic and likes to play chase with other Pokémon. During the events of the Pokémon Summer Camp, Charmander got startled and ran off. Upon encountering the heroes' Pokémon, it used Fire Fang on Chespin, causing him to get burned and doused by Tierno's Squirtle's Water Gun. Trevor ran and caught his Charmander, apologizing to others for the trouble. Later, Trevor sent Charmander to battle Clemont's Chespin. Charmander used Flame Charge, litting Chespin's tail, who extinguished it by laying on the sand.[1]

The following day, Trevor took Charmander through the dark maze to collect a stamp. When Bonnie was gone missing, the teams noticed some footprints; Charmander followed them and illuminated the foggy area. Once they found Bonnie, Trevor had Charmander attack some Drifloon and Drifblim with Flamethrower, causing them to float and allow Ash to jump onto them to save Bonnie. However, when Ash was returning, he nearly fell down, so everyone pulled Clemont's Aipom Arm to pull Ash, Bonnie and Pikachu back up.[3]

On the last day of the Pokémon Summer Camp, before the tournament began, Team Squirtle came to the cooks - who were the Team Rocket Trio - and were told they needed to hand over their Pokémon for health inspection at the Pokémon Center. Tierno gave his Squirtle, Shauna her Bulbasaur and Trevor his Charmander. After some time, Team Squirtle visited the Pokémon Center and were shocked to hear the cooks did not give her the Pokémon. The heroes joined Team Squirtle in finding the missing Pokémon. They found the cooks and Pikachu removed the table cloth, revealing Team Squirtle's Pokémon had been captured and binded by Leech Seed. Team Rocket removed their disguises and attacked with Inkay and Pumpkaboo. Clemont's Bunnelby used Dig, distracting Team Rocket and allowing Froakie to free the Pokémon by using Cut on the vines. Later on, Team Squirtle faced Team Froakie in a three-on-three battle. Charmander started with Flamethrower, a move which Fennekin used as well for collision. Charmander used Flame Burst on Chespin, and due to the secondary effect, the move hit Pikachu as well. After Serena's Fennekin was defeated, Charmander tried to defeat Pikachu with Flamethrower, but was defeated by his Thunderbolt.[4]

Due to chaos raging in Lumiose City, Trevor sent Charizard to help him protect and escort the citizens to safety.[10] Trevor's Charizard was with its trainer at a Pokémon Center, where Trevor watched the broadcast about the Giant Rock.[11][12]

Ash remembered Trevor and his Charizard, as Charmeleon, witnessing Fletchinder's evolution when he was reflecting back on his journey.[13] 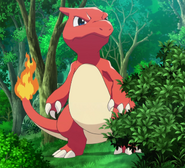 Retrieved from "https://pokemon.fandom.com/wiki/Trevor%27s_Charizard?oldid=1353345"
Community content is available under CC-BY-SA unless otherwise noted.