Trevenant resembles a tree, with bushes around its wrists and on its head. Its body is inside broken parts of wood, and it has two branches on its head. It has a giant red eye, which resembles Dusclops'. It walks on its roots, which look like many legs. When a Trevenant dies or passes away, it becomes a normal tree.

Because of its terrifying appearance, Trevenant has often been given the reputation as a ghost roaming the forest that it inhabits. Its aversion of Fire types (being part Grass type), has led it to being a victim of lumberjacks who brings Fire types to repel it. Trevenant has been known to devour anyone who destroys its forest home, but it is kind to other Pokémon or Humans which inhabit the forest. Legend says that a curse will be inflicted onto those who cut down the trees in forests Trevenant lives in.

Trevenant is able to manipulate and control all forms of trees through the use of its nervous system.

Trevenant is the evolved form of Phantump. It evolves when traded.

Trevenant is mostly based on a deadwood tree, a tree that has partially died and takes a twisty appearance, similarly to Trevenant's horns, legs, and claws. It is also likely based on a Kodama, a spirit in Japanese mythology that takes the form of a tree. Trevenant's acts of protecting it's forest home are also similar to the Kodama, as if a human were to cut down a tree a Kodama possesses, they would become cursed. It also shares similarities to a hamadryads, tree nymphs tied to their home trees by life, and would punish mortals who would kill trees. Its shape is also similar to the kanji for "tree" (木, boku). Its Shiny coloration is based on a birch tree with autumn leaves, but may also be based on the white coloration of ghosts in most media.

Trevanant comes from tree, treant (another name for the Ent, a mythical creature that takes on the appearance of an anthropomorphic tree) and revenant (a person supposedly risen from the dead). 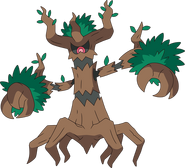 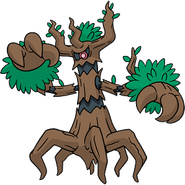 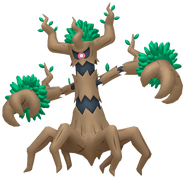 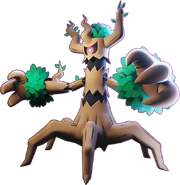 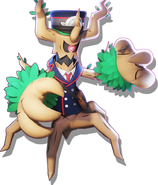 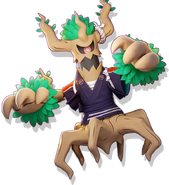