Pokémon Trainer
Rival
Pokémon Champion (Kanto)
Trace is the rival of the player character in Pokémon: Let's Go, Pikachu! and Let's Go, Eevee!. He is analogous to Blue.

Trace is a very cheerful person with a lot of enthusiasm. He is shown to have a lot of respect to trainers, even if he loses. Just like lots of the previous rivals, he is also a friendly rival.

Trace is a good-heart, brave young boy from Pallet Town. Like the player, his adventure begins one day when Professor Oak calls the two to his lab for a Starter Pokémon. His starter is a normal Eevee/Pikachu that eventually evolves into the Electric-type Jolteon/Raichu. Trace travels through the Kanto region, defeating Gym Leaders while assisting the player with advice and items.

In Lavender Town, Trace learns about the evil deeds of Team Rocket, and meets the son of a Marowak that died protecting it. After Cubone calms his mother's spirit near the top of Pokémon Tower, Trace takes him back to Lavender Town, where he adopts him into his party, and swears to help him avenge its mother. Trace, Cubone, and the rest of Trace's party help the player fight Team Rocket at Silph Co., fighting Archer in a Multi Battle and later holding off Team Rocket's Admin while the player confronts Giovanni. Eventually, Trace becomes the Champion at Indigo Plateau, though he soon loses his title to the player. Later, he keeps rematching the player at the Pokémon League in an attempt to reclaim his title. 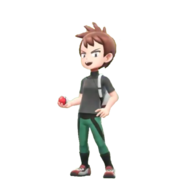 Concept art of Trace for Let's Go Pikachu/Eevee
Add a photo to this gallery
Retrieved from "https://pokemon.fandom.com/wiki/Trace_(game)?oldid=1419241"
Community content is available under CC-BY-SA unless otherwise noted.