Punk Rock
Plus
Minus
Technician (DW)

Amped Form Toxtricity is a bipedal, salamander-like Pokémon with a purple-colored body and a yellow underbelly. It has electric frills that extends from front nose to neck. It has black eyes with white sclera. It has two short horns on top while large horns behind both sides of eyes. On its back are two smaller electric spikes along with four purple horns on four yellow spots each. Six organs protrudes on its chest. It wear a crescent shaped body part with seven spikes located between lower body. The wrist of its arms have four spikes each. There are three long strips on its two legs. It also has yellow underside on its three fingered hands and underneath its feet.

Low Key Form Toxtricity has a purple-colored body with a light-blue underbelly. It has two electric frills extending from head to neck. Its eyes are black with white sclera. A fin-like horn is located on Toxtricity's head with two smaller horns behind both sides of the eyes. The back has four small purple horns on light blue spots. Four fused organs protrude on its chest. A crescent-shaped body parts with seven spikes is located on the lower half of its body. The wrists have four spikes each. The legs each have three light blue stripes. The feet and hands have a light blue underside each.

As Gigantamax Toxtricity, it has a larger appearance that resembles a combination of its two forms that walks on all fours. It now has a dark-purple body with a dark pink underbelly. It has a yellow electric frills with light-blue electric frills on both sides from head to back. The eyes changes to a yellow star with light blue sclera. its two short horns on both sides while two longer horns between spikes and above eyes. Four bright pink horns can be seen on its back. The chest has two light-blue organs along with four yellow organs protruding. The crescent body changes to a bight pink and resembling two power conductor coils. The back spikes change to a tail with four spikes each. Three red clouds surround the tail. The wrist spikes change to bright pink as well. There are four dark pinks stripes on its legs. The hands and feet have dark pink undersides each.

Amped Form Toxtricity are known to be short-tempered and extremely confident. This form aggressively attacks anything that makes eye contact with it. It slowly absorbs stagnant water for the toxin it contains. It then breaks down the poison in order for Amped Form Toxtricity to generate electricity.

Low Key Form Toxtricity are known to be selfish and have a high regard towards its strength. Unlike its Amped form counterpart, Toxtricity prefers to taunt opponents into fighting it when making eye contract with them. It can generate 15,000 volts of electricity. Low Key Toxtricity looks down at anything that would challenge it.

By clawing at its protrusion located on its chest, both forms of Toxtricity can generate electricity. The sound it makes resembles that of an electric string instrument; a standard guitar for Amped Form, and a bass guitar for Low Key Form.

Gigantamax Toxtricity's main weapon is the excessive energy it generates while Gigantamaxing. It can create more electricity than a thundercloud and can also store up to one million liters of poison. Due to the poison that penetrated its brain, Toxtricity has lost control of itself. It rampages across the land by contaminating it with toxic sweat which gushes and pours down like acid rain. Gigantamax Toxtricity can create a gigantic mass of electricity shaped like a guitar from the electricity it stores. This mass is powerful enough to create a giant huge crater.

Toxtricity is the only known Pokémon capable of using the moves Overdrive and G-Max Stun Shock.

It evolves from Toxel starting at level 30. The form it evolves into depends on its Nature.

Toxtricity appears to be based on Agama lizards (which are brightly coloured and share the same spiky hairdo as Toxtricity), and/or tree frogs. Its overall appearance seems to be a Newt larva metamorphosing into an adult (since its spiky hair resembles gills) which may imply why it has the Poison type.

It is also based on the theme of punk rock or rock music guitarists, having a mohawk. They themselves also appear to be based on electric guitars and basses, with the Amped Form having six strings just like a guitar while the Low Key Form has four strings just like a bass. Appropriately, the colorful aposematic nature of poison dart frogs, and its nature to deliberately seek out tainted and stagnant water to ingest may hearken to psychedelic rock, which was prominent in late 20th Century UK. The spikes around its arms and waist also resemble spiked cuffs and belts.

Gigantamax Toxtricity's tail resembles a utility pole. Its G-Max Move is reminiscent of the action of a guitarist slamming their instrument in front of them, an action often done at the end of packed concerts.

Toxtricity is a portmanteau of the words toxicity and electricity.

Sutorindā is a portmanteau of "string," "salamander," and possibly "guitar." 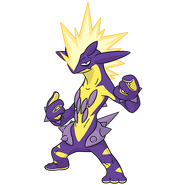 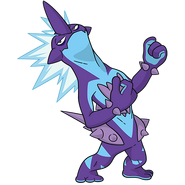 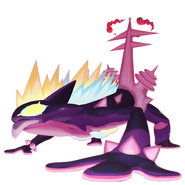 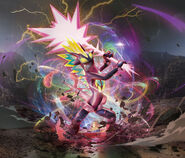