Toxicroak is an amphibian-like Pokémon that bears a close resemblance to a Poison Dart Frog. It has sickly blue skin with a bulging orange throat. Its middle toes are orange as well, and on both hands, it has a poisonous orange claw.

Male Toxicroak have bigger throat-sacs than the females.

It can be cruel and fearsome or it can be laid back depending on the situation or the personality of the individual.

Toxicroak is the evolved form of Croagunk as of level 37.

Toxicroak belongs to Saturn, a Team Galactic Commander. Toxicroak has been seen making scary faces with Brock's Croagunk, making this part of the Anime a comical sight. It also appears to be shiny.

Toxicroak's name comes from the words "Toxic" and "Croak". Toxicroak's design is based on a poison dart frog. 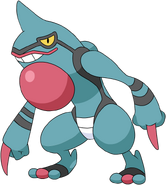 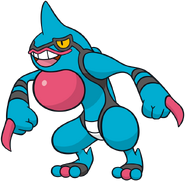 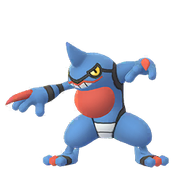