Toxel is a purple colored reptilian, vaguely baby-like Pokémon. Its head has four small spikes and a small white electric volt protruding from its forehead. Its eyes are always half closed and have gray-blue irises. It has two white ovals on its cheeks, and a white spot in the shape of a bib on its belly. It also wears a diaper, being a Baby Pokémon, which also completely covers its long tail. It limbs only have two fingers and toes each.

At a first glance, it would appear that these baby Pokémon are prime targets for opportunistic predators. Neither skilled at camouflage nor offense, Toxel seem like sitting ducks out in the open grasslands and badlands that they call home.

However, most Pokémon know to avoid attacking these creatures. Toxel in fact secrete poison from specialized sacs in their bodies through their skin. Even grazing them will lead to numbness, while more serious exposure can lead to paralysis. Most predators learn to stay away from all Toxel after a single unpleasant experience.

As they are neither very fast nor strong, Toxel primarily eat unfortunate insects that stray too close and become immobilized by their poison or electricity. These quadrupedal Pokémon have a charming habit of sitting upright like human infants. They will attempt to toddle around on two legs until they fall over. Even at this young age, Toxel display very apparent differences in personality between individuals. Some Toxel tend to be brash and impulsive, while others are more reserved and cautious. These personality differences appear dictate what form of Toxtricity they will eventually evolve into.

Toxel may be based on different species of salamanders, lizards, or tree frogs, mostly likely the latter due to its Poison-typing. It may also be based on a human baby, as it is wearing a diaper and also has tantrums during its battle animations.

Toxel is a portmanteau of 'toxic', 'electric', 'little', and possibly 'pixel' (the smallest unit of a digital image) or 'voxel' (the 3D equivalent of a pixel).

Erezun is a portmanteau of "electricity" and "poison". 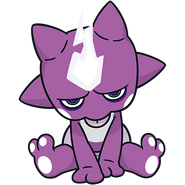 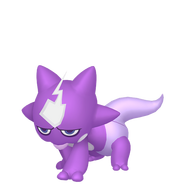