Toxapex retains its previous evolution's color scheme of purple and blue. Toxapex is larger than its pre-evolution, but interestingly its actual body of which the tentacles are attached to is now smaller and is now hanging instead of being on the ground. Toxapex now has twelve large tentacles on its head, ten used to crawl and two that hang open in order to act as arms and reveal its body. Toxapex also has a crown of thorns placed around a larger center spike.

Toxapex, as a predator, is slow, being only able to crawl along the seafloor and beaches in search of prey. Its favorite food is Corsola, possibly referencing the fact that the two creatures they are based on the Thorn Of Crowns Sea Star and Coral are predator and prey in reality. In theory, Toxapex will wait for prey to come by, hiding itself behind rocks or under sand, until it is either in arms or tentacle, reach or at least close enough to be chase worthy.

Highly venomous and can protect itself by closing its open tentacles and extending its poisonous spikes to create a toxic barrier (Baneful Bunker) that is next to impervious.

Apparently, its poison lasts for 72 hours and has lingering side effects.

Toxapex derives from the words toxic (highly poisonous), pecks (a short word for sharp spines) and apex meaning "apex predator". An apex predator is an animal that is at the top of a food chain, as it eats Corsola and is relatively strong. This is also its Spanish name. 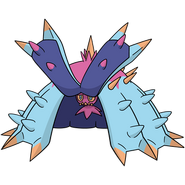 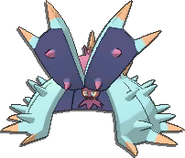 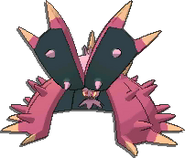