Pokémon Wiki
Register
Don't have an account?
Sign In
Advertisement
in: Male characters, Pokémon the Series: Diamond and Pearl characters

For the variant appearing in the games, see Tower Tycoon Palmer.

Pokémon the Series: Diamond and Pearl
Movie(s):
Pokémon - Arceus and the Jewel of Life

Tower Tycoon Palmer is a character appearing in Pokémon: DP Galactic Battles, who is the Frontier Brain of the Battle Tower in the Battle Frontier in the Sinnoh region.

This section, or a part of it, has been transcluded from Tower Tycoon Palmer; any changes involving it should be made there instead. /

Palmer is a tall man, who has orange eyes and yellow hair. He wears a green coat with yellow buttons and a symbol on the back, a white shirt, brown pants with a black belt, black boots and black gloves.

Palmer, like his son, Barry, can daze away and focus on other, less important matters. However, he is a strong Trainer, who commands his Pokémon with respect.

Palmer was a Frontier Brain of the Battle Tower in Sinnoh Battle Frontier. He raised his Pokémon with respect, earning him a lot of power to use in battles.[1]

Barry was chasing after a Xatu when he bumped into his father, Palmer. Palmer asked Barry what he saw moments earlier if it was a dream, thinking Xatu's power enabled them to see the past events to see their futures.[2]

Returning to the festival, Palmer sent Dragonite to pose among his fans. The next day, Palmer was sitting and relaxing when he was called to the stage. He announced to the participants of the tournament to do their best, for the winner would have a chance to battle him, and earn a trophy. Ash eventually won and faced Palmer, using his Grotle against his Rhyperior. Rhyperior endured its Energy Ball, as its Solid Rock Ability reduced damage from super-effective attacks. Rhyperior used Rock Polish to increase its speed, and fired a Sandstorm.

Grotle's Razor Leaf removed the effect of Sandstorm, and as it was fighting Rhyperior, it swallowed its own Energy Ball. This caused Grotle to become more powerful, and it moved on to use Rock Climb. Palmer admitted Ash was a unique opponent, and had Rhperior block Grotle's moves by binding its tail, and using Rock Wrecker to defeat it. Still, Palmer gave Ash a trophy for competing in the tournament. At the end of the festival, Palmer asked Ash which Gym Leader he could face next. Ash was unsure, so Palmer advised him to go to Sunyshore City, which had a powerful opponent for Ash.[1]

Pokémon - Arceus and the Jewel of Life

Cynthia and Garchomp were seen battling Palmer and his Milotic.[3] 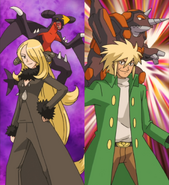