Toucannon is an avian Pokémon with black feathers and a prominent beak similar to a toucan. The upper part of the beak has a black tip with three red bands gradually lightening in color toward the yellow base. The mandible is smaller and solid red. Around the base of the beak is a thin black band with two extensions into the upper jaw similar to nostrils. The red bands on Toucannon's beak can change color and move from the tip to the base. There is a white marking covering its chin and chest, and a half-circle, yellow marking on each cheek. Toucannon has dark blue eyes, light blue eyelids, and jagged, gray eyebrows. It has a long tail with a spiky ruff of red feathers around the base, and spindly blue legs. Each foot has two forward-facing toes with black talons and two rear-facing toes with no visible claws. Its tail seems to be bent specifically for the purpose of holding it momentarily, as it can stand on it for short periods

Toucannon express their moods with their kind by knocking their beaks as a means of communication, each time with varied frequencies and intensities of each knock.

In addition, Toucannon are well known for being faithful and harmonious with their mates, thus they are frequently being brought to weddings as lucky blessings for newlyweds.

Toucannon can ignite internal gas inside its beak to fire off seeds with immense power, sort of how gunpowder is ignited to fire a cannonball from a cannon. They can also burst the internal gases from their beaks, which are powerful enough to crush boulders.

Toucannon is the evolved form of Trumbeak as of level 28. It is also the final evolution of Pikipek.

Toucannon is based on a toco toucan. Its evolution from a woodpecker-like bird may be a reference to toucans and woodpeckers being closely related in real life. It may also be based on a cannon, considering its beak can heat up and shoot seeds just like cannonballs.

Toucannon comes from toucan and cannon. 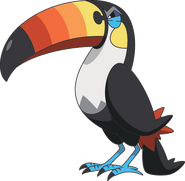 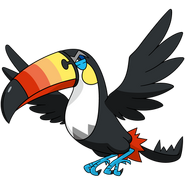 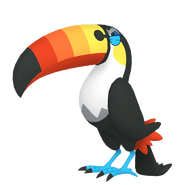 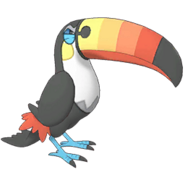 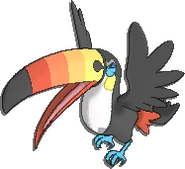 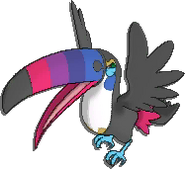 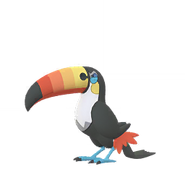