Torracat (ニャヒート, Nyahiito) is a Fire-type Pokémon introduced in Sun and Moon. It is the evolved form of Litten. It evolves into Incineroar.

Torracat is a quadruped, cat Pokémon with red orange and black markings. Its upper half is mostly black, while its lower half is mostly red-orange. The black area has several red-orange stripes: one running up the center of its head forming a short cowlick with one horizontal stripe through the center and a slightly V-shaped stripe at the bottom of its eyes, one running down its spine with two more stripes going across it, and two rings around its tail. The lower half of its body simply has two black rings around each leg. Its forelegs are more developed than its hind legs. Each paw has three toes, but the front ones are larger with short, black claws. Its tail has several tufts of fur on the tip.

Torracat has large, yellow eyes with black sclerae and pupils that have a red tint along the base. There are two long tufts of hide on each of its cheeks with a shorter tuft only underneath on either side of its jaw. It has a small, triangular black nose and long, pointed ears with gray insides. Swinging from its neck is a round,bell- like organ, which is yellow with an orange center. When Torracat attacks, this organ now and then flares with wing-like projections to the sides.

This flame sac is directly connected to the brains of Torracat and reacts specifically to their mood. When they are calm, the bell remains unlit, but the moment their temper spikes and they feel angry or ready for a scuffle, the bell will ignite and start to produce a bright flame.When they are extremely agitated or excited, the bell will even produce a ringing sound as the temperature of the flame inside of it increases over time.Torracat in fact act somewhat bratty around familiar faces. Some would even call them spoiled; they may even scratch their trainers if they displease them.Their fur will stand on end when Torracat healthy and happy, but lie flat and matted when they are sick or upset. Torracat use their thick manes, which have actually adapted to take the place of standard whiskers, to navigate dark areas. This helps them locate prey in the dim undergrowth of their jungle habitats or under the cover of dark nights.

Torracat are fierce fighters and have a great love for battle, oftentimes attacking their opponents relentlessly to the point where the opposition loses the will to fight.

When they utilize Fire-type attacks, these sacs flare up and quickly begin to heat, allowing them to begin spewing flames within seconds.Their forelegs are incredibly strong for a creature of their size; in fact, they can actually swipe down at a target with such force that they can bend iron bars in a single blow and even knock down grown men.

Torracat is the evolved form of Litten as of level 17. It evolves into Incineroar at level 34.

Torracat is based on a domestic cat, specifically a tabby cat, with a bell on a collar, like many cat owners have their cats wear. Its coloration and fur pattern is based on a tiger.

Its Japanese name, Nyahiito, comes from nya ("meow" in Japanese) and heat. 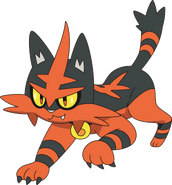 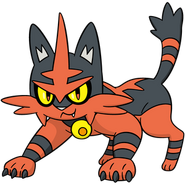 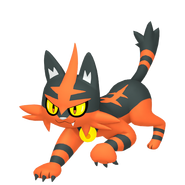 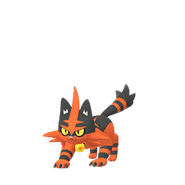