Torkoal is a rust-red tortoise whose black shell has seven coal vents.

It digs through mountains in search of coal, which it stuffs in the vents and burns inside its shell for energy. The vents can be used to blow out volcanic ash when Torkoal is in danger or angry, providing a smokescreen for its retreat. It may also blow smoke through its nostrils, sounding very like a locomotive. It consumes extra coal to prepare for a battle, but grows weaker as its fire dies down.

Torkoal does not evolve.

In the anime series, Torkoal is voiced by Shin-ichiro Miki in Japanese and by Maddie Blaustein and later Billy Beach in English after she passed away. Ash's Torkoal was found being picked on by Steel-type Pokémon.

Torkoal is based on a tortoise with some elements of furnaces and stoves.

Torkoal's name is the portmanteau of "tortoise" and "coal". 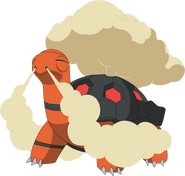 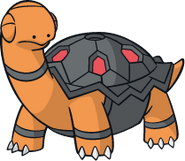 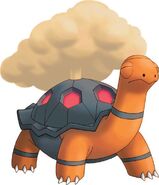 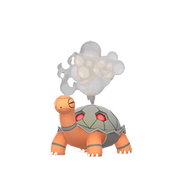 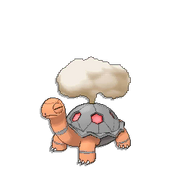 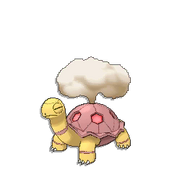