Tommy is a character appearing in Pokémon: Advanced.

Tommy had a Mudkip, whom he trained a lot. The two of them were friends, even after Mudkip evolved into a Marshtomp. Tommy went on a ship, which crashed. Tommy was forced to leave and forgot Marshtomp on the ship.

Eventually, Tommy returned back to the abandoned ship, searching for Marshtomp. He found the heroes, who were stranded on the ship and gave them a meal while he was searching. Just then, Torchic was taken away into the ship, by a mysterious monster. The heroes and Tommy went to search for Torchic, but May and Max were taken away as well. Brock sent Mudkip, who followed the monster to a room, where May, Max and Team Rocket were captured. Tommy saw the monster was a Swampert, who started to attack them. Tommy knew the Swampert was actually his Marshtomp, who evolved during his absence. Swampert was hostile, but Tommy managed to calm it down, after Swampert saw Brock's Mudkip and recalled its happy moments with Tommy. Everyone was released from their capture, though Team Rocket went to capture all the Pokémon. Tommy had Swampert blast them off and take the heroes to Slateport City. 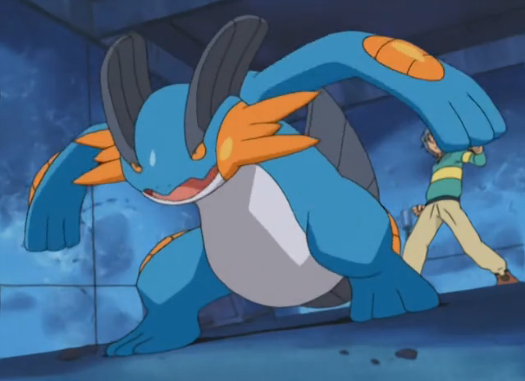 Retrieved from "https://pokemon.fandom.com/wiki/Tommy_(RS032)?oldid=1250925"
Community content is available under CC-BY-SA unless otherwise noted.