Togedemaru is a small, grey, round mouse-like Pokémon. It has a long grey tail resembling a lightning bolt with a yellow tip. It has three flat triangular spike-like flaps on each side of its body. On both sides, two of its flaps are yellow with the middle flap being brown. It's face plate is cover with white fur reaching down to its legs and feet, with its ears at the upper tips of its face plate. There are round yellow circles on its cheeks used for storing electricity. Its arms are stubby and are located around the middle of its face plate.

Togedemaru is likely based on a hedgehog. It continues the pattern of Electric Rodents like Pikachu, Pichu, Plusle and Minun, Pachirisu, Emolga, and Dedenne before it.

Togedemaru is the same name in every language, meaning that it has Japanese origin. It is assumed to literally be "棘で丸" ("thorned" and "round"). It may be based on togenezumi (Ryukyu spiny rats) and denki("電気" - Electric) as well. 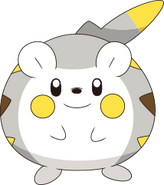 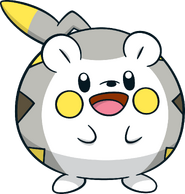 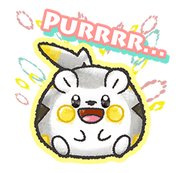 Add a photo to this gallery
← Turtonator | Togedemaru | Mimikyu →
Retrieved from "https://pokemon.fandom.com/wiki/Togedemaru?oldid=1019922"
Community content is available under CC-BY-SA unless otherwise noted.