Tierno in other languages

Tierno is a character from the X and Y video games. He appears to be burly and nimble. He has a goal is to create a dance team with his Pokémon and he pays attention to Pokémon when they battle to see if he can incorporate with their actions into new dance moves.

Tierno is a tall, heavy-set boy with black hair in a short back and sides that also resembles the leaves on Chespin's head. One of his most noticeable qualities is that he has a rather overweight physique. Even so, this hardly seems to impact his desire to be a dancer. He is shown wearing a large black T-shirt that has a Vanillite design on it, orange cargo shorts, a yellow backpack, and matching black and yellow sneakers. Tierno also wears a yellow watch with a black wristband.

Tierno is often upbeat and positive. While he strives to create a dance team of Pokémon, he is often distracted by the moves of other Pokémon during battle.

Tierno, along with Trevor, Shauna, and Calem/Serena, meet with the player during the start of the game in Aquacorde Town, where he presents the player with their starter Pokémon: Chespin, Froakie, and Fennekin.

After defeating the Elite Four, the player can find Tierno in the cliff area of Coumarine City. He will ask the player to show him a Pokémon that knows a certain dance move. If the player shows him one, Tierno will give the player a Heart Scale. The move he asks for changes daily, so the process can be repeated multiple times. 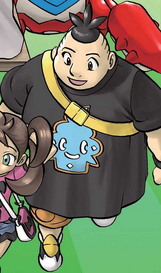 Tierno in the "I Choose You" alternate universe (anime)

Tierno and Trevor's Battle VS Scene in X & Y

When choosing Tierno as a partner for Multi Battles in the Battle Maison he'll always have this team: