Thwackey is a yellowish-green monkey-like Pokémon. It resembles its pre-evolution in most aspects. Its humanoid hands are orange with green armbands and brown arms, while its fur becomes a lighter green. The ”mask” on its face has taken on a slightly different shape, now resembling sunglasses and with two protrusions that resemble two leaves above its eyes. Its irises have turned light yellow, while its tail has shrunk into a brown bush similar to Chimchar's flame. Its stick has divided in 2 and acts as a hairclip for its hair, which has become rounder. It has a belly pattern similar to that of Rillaboom, its final evolution.

Thwackey keeps a steady beat during its daily life. It walks while swaying back and forth to a rhythm and drumming with its twin sticks. Due to being immersed with its practicing, it oftentimes neglect its trainer's instructions. Some have even witnessed Thwackey honing its skills when it is eating.

Thwackey uses the 2 sticks it carries to keep rhythm, spending most of their time to practice drumming skills, which are displayed as Rillaboom's fighting style, as represented by Rillaboom's signature move, Drum Beating.

Thwackey evolves from Grookey at level 16, then evolves into Rillaboom at level 35.

Thwackey is likely based on a squirrel monkey (due to its distinctive muzzle) and an aspiring drummer.

Thwackey is a combination of thwack and monkey.

Bachinkii is a portmanteau of bachi (the sticks used to play taiko drums) and monkey. 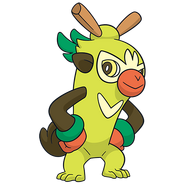 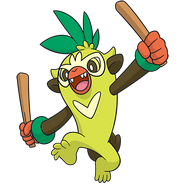