Thievul (フォクスライ, Fokusurai) is a dark-type introduced in Generation VIII. It is the evolved form of Nickit.

Thievul is an orange, fox-like Pokémon. Its ears are large, black, and pointy. Around its eyes are black fur resembling a mask and a mustache. Its eyebrows and underside are white. Its legs are black and resemble boots. On its back is a black forked stripe.

Thievul steal food and eggs from their victims, by stalking their victims' scent and leave markings as a reminder for themselves to rob from their targets who are about to loosen up. But they are naturally afraid of Boltund.

Thievul usually diet on Pokémon Eggs, though they also sometimes rob food from humans and other Pokémon.

Theivul evolves from Nickit at level 18.

Thievul is based on a red fox and a burglar or thief. Its tail resembles a sack of stolen items. Its face resembles stereotypical depictions of burglars, and may also draw inspiration from the Guy Fawkes mask. Its whiskers resemble a moustache, possibly a play on the motif of a Gentleman Thief.

Thievul is a combination of "thief" and "vulpine" (a term referring to foxes). The end of its name is also pronounced similarly to "evil", as it is a dark-type, a type associated with evil. 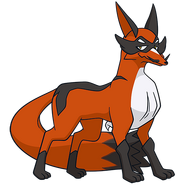 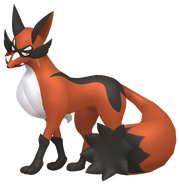