Coming Back into the Cold!

Thaddeus is a character from Pokémon the Series: XY. 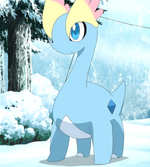