Tepig (Japanese: ポカブ Pokabu) is a Fire-type Starter Pokémon of the Unova region, introduced in Generation V. Tepig is one of three Starter Pokémon of Unova that trainers can choose from Pokémon Black, White, Black 2, and White 2, along with Oshawott and Snivy.

Tepig is a small quadrupedal mammalian Pokémon that resembles a piglet. Its plump body, which gets fatter towards its rump, is mainly a bright fiery orange color. Its ears, forehead, backside, tail, and the tips of its front feet are black. It has long ears, large eyes with black pupils, and a distinctly pig-like pink nose with two large nostrils. It has a short yellow stripe extending vertically across the front of its face, just above its nose. It has a short curly tail with a round red orb at the tip; the orb at the tip of Tepig's tail glows when it uses its Fire-type attacks.

Tepig shoots fire from its nostrils, but when it is unhealthy the fire it exhales from its nose becomes black smoke. When it's delighted, it wags its tail rapidly.

Tepig mostly eat berries and roasts them before eating.

Tepig can use its nose to breath out flames.

Tepig made its first appearance in In the Shadow of Zekrom! Ash caught his own Tepig in BW004: The Battle Club and Tepig's Choice!, later evolving into Pignite during a battle against his former trainer, Shamus.

In the Pokémon Adventures manga, Black owns a Tepig. 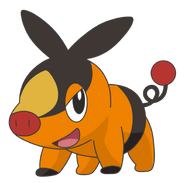 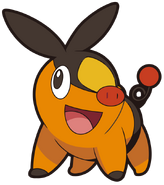 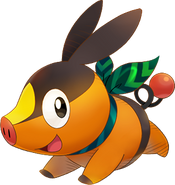 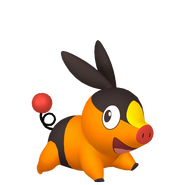 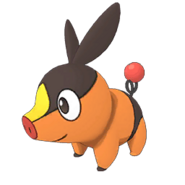 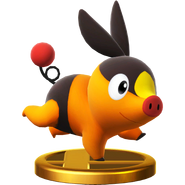 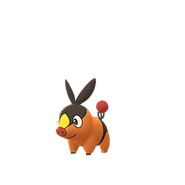