Pokémon Sword and Shield
Team Yell is a group of Trainers from Spikemuth, who are initially first seen as an antagonistic gang set in the Galar region. They are rabid fans of Marnie and employees of her elder brother, Piers, who vandalize and obstruct her competitors to help her win publicity for their hometown of Spikemuth.

Team Yell was formed when Pier's younger sister Marnie registered for the Gym Challenge, several Gym Trainers from the Spikemuth Gym banded together to form Team Yell and act as a cheering gang for her; however, they also became vandals attempting to takedown Marnie's competition.

Team Yell first appears in Motosoke. The trainer is forced to fight them before Marnie arrives and dismisses them. Team Yell then later appears in various cities and towns, often blocking the trainer from advancing until they earn the town's gym badge.

Other instances in which the trainer is forced to fight them includes: Immediately outside the Hammerlocke west exit and Galar Mine 2. Most notably, they blockaded the main entrance to Spikemuth in an effort to prevent trainers from advancing in the gym challenge so that Marnie would be the only one to reach the finals.

After the player character defeated Piers, it was revealed that the Team Yell grunts are the trainers that make up Spikemuth's gym trainers, and their overzealous behavior was because of Spikemuth's continuously deteriorating state, as less and fewer people were visiting the town because of its lack of a Power Spot. Spikemuth's Trainers were afraid that their Gym would be shut down and the town would lose one of its last fame and revenue streams, so they formed Team Yell to help Marnie become the new champion, which, in turn, would bring more people to Spikemuth. With that revelation, Piers and Marnie instructed Team Yell to open up the gates to Spikemuth and stop trying to boycott other trainers, allowing the Gym Challenge to continue as intended.

During the Championship Finals Piers had Team Yell assist the player in finding the League Staff member who held the key to the monorail and later helped the player and Hop sneak into Rose Tower. During the post-game, Team Yell returned to their duties as Gym Trainers in Spikemuth, which now has more tourists visiting it as Marnie became popular during the Gym Challenge and she is the new Gym Leader. Several members can also be seen outside the Wyndon Stadium, now claiming that they just want to watch Battles and will no longer cause trouble. 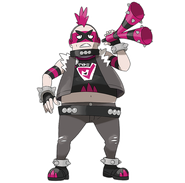 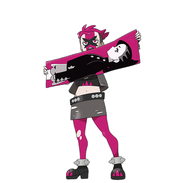 Piers, the leader of Team Yell

Marnie, the idol of Team Yell