X and Y
Team Flare is the antagonistic team that appears in Pokémon X and Y. The group was founded by Lysandre in his hopes of creating a "beautiful world".

They steal whatever resources and materials needed for their plan without remorse. Team Flare hopes to achieve their goal by reactivating the Ultimate Weapon, built centuries ago by AZ, to eliminate all life except themselves to reduce the strain on the world's resources.

All of the Team Flare grunts wear fashionable red suits, under which is a white shirt and a black tie, along with black gloves, shoes, and matching red sunglasses. The Team Flare signal resides on the belt buckle of the outfit. The group has also styled their hair to look like red flames.

The admins wear white business suits, with red shirts and gloves. Females wear a skirt with red tights and short, red hair, while the males are usually seen bald. Like the grunts, they possess a belt buckle with the Team Flare signal.

Teame Flare pilfers many things during the course of the tale. They steal power from the Lumiose City power plant, plunging half the city into darkness until Calem/Serena "evicts" them, in order to try waking the legendary Pokémon trapped in the form of a tree/cocoon.

To compensate the Ultimate Weapon's power needs, they steal Poké Balls from the manufacturing plant; these are used to capture numerous Pokémon. These Pokémon are used as "batteries" to fuel the Ultimate Weapon, by feeding it their life energy via the strange stones near the device.

Attached to the device's core is the legendary Pokémon that Team Flare is attempting to drain dry of its powers in order to further increases the weapon's destructive powers.

Eventually, Calem/Serena battle their way into the depths of the hideout and dismantle the Ultimate Weapon. The results in all the energy sucked out of the tree/cocoon surging back into it and awakening Xerneas/Yeveltal. Annoyed, but surprised by the result, Lysandre attempts to subdue them and reattach the legendary Pokémon to the Ultimate Weapon to continue his plans. However, he is defeated and accepts the result. Unfortunately, due to wanting to make the battle a Draw, Lysandre uses the available energy in the device in a suicidal attempt to destroy the hideout. Calem/Serena barely manage to escape alive. Lysandre does not appear after this point and it is not clear if he survived the destruction of the hideout.

Following the sinking of the Ultimate Weapon, Team Flare is no more. Some of their former members can be found across Kalos, wondering what to do with their lives now that the "beautiful world" they envisioned can no longer be achieved.

Xerosic decides to take up his own research by stealing and selling the Pokémon belonging to the residents of Lumiose City in the meantime, coming into confrontation with member of the international police force - Looker.

Lysandre was seen monitoring Alain's Charizard's energy levels during its Mega Evolution from his laboratory, (A towering takeover) and was apparently pleased with the result. He was investigating, leading to Mega Rayquaza attacking. Thanks to the efforts of Alain, Steven, and their Pokémon, Lysandre was able to secure a giant Key Stone for his research. Xerosic and two Team Flare Admins conducted a test of a prototype weapon powered using Zygarde and the Mega Evolution energy.

They infiltrated Prism Tower in Kalos League Passion with a Certain Flare!, and executed their scheme after the conclusion of the Lumiose Conference in Down to the Fiery Finish!, using Zygarde to slowly destroy the Kalos Region, starting with Lumiose City. Ash and his friends try to stop Team Flare, but Ash and his Pokémon ended up getting captured by them. Lysandre wanted to closely observe the Bond Phenomenon between Ash and Greninja also to use them for his plan along with using Ash's other Pokémon as hostages. During the next episode, Ash broke free, and Alain, shocked by the results of his actions, defected from the team, with the duo facing Lysandre. Meanwhile, Xerosic successfully captured Squishy, while Clemont and Clembot were able to infiltrate the Lumiose Gym, capturing Aliana and Bryony in the process. Lysandre was defeated by Ash, Malva, and Alain and seemingly committed suicide, while Celosia and Mable were defeated and imprisoned by Team Rocket. Lysandre Labs was then destroyed when the Megalith transformed into a giant copy of Zygarde. Lysandre was revealed to have survived and used the Megalith Zygarde to battle Ash, Alain, Malva, Steven, Professor Sycamore, Diantha, and all of Kalos' Gym Leaders. Eventually, the Megalith Zygarde was destroyed when Squishy and Z2 transformed into a complete Zygarde and attacked it with Core Enforcer. Lysandre was engulfed by the attack and seemingly died as well. Afterwards, Malva promised to hunt down the other Team Flare members and afterwards turn herself in as well.

Xerosic planning on creating Neo-Team Flare in hopes of carrying out Lysandre's wicked ambitions. And in doing so, he abducted Clemont as an act of revenge for his trap door trick during the crisis, believing that he could use his intelligence as part of his plan. As he is driving away, he used his Mega Evolution energy beam to take control of Clemont. When Ash, Serena, Bonnie, and Greninja arrived, he ordered Clemont to seize them. However, it was revealed that Clemont placed a microchip on the side of his head to prevent himself from being controlled. Outraged, Xerosic battled Ash and Clemont, but was eventually defeated. He tried to escape by jumping off his jet, but Clemont grabbed him with his Aipom Arm. After the jet landed, Xerosic was arrested by Officer Jenny thus bringing an end to Team Flare once and for all.

Unlike the games, where Team Flare hunts down Xerneas or Yveltal, Zygarde is their main target in the anime. Instead of stealing Poké Balls or electricity to further their plans, they utilize energy collected from Pokémon undergoing Mega Evolution.

Member disguised as a waitress. 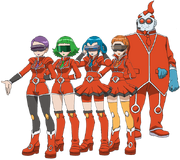 The scientists in XY&Z anime. 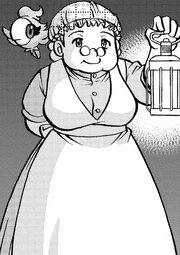 Member diguised an as Innkeeper 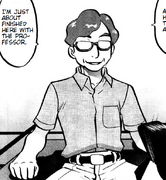 Editor-in-chief of the Lumiose Press

Concept art of the grunts
Add a photo to this gallery
Retrieved from "https://pokemon.fandom.com/wiki/Team_Flare?oldid=1422399"
Community content is available under CC-BY-SA unless otherwise noted.