Ruby and Sapphire
Omega Ruby and Alpha Sapphire
Team Aqua was one of the two criminal syndicates active in Hoenn during the storyline of Pokémon Ruby, Sapphire, and Emerald that had the opposite goal of Team Magma: to expand the sea, rather than land. They attempt to do this by manipulating Kyogre to cause non-stop rain. In the Pokémon world, Team Aqua is a group of thieves/peacemakers in the Hoenn region. They specialize in using Water and Dark-type Pokémon.

Team Aqua is based in a cave in the cove of Lilycove City and in the Seafloor Cavern. The team members all wear striped black and white shirts with jeans. Their bandanas bear a white skull-and-crossbone in the shape of the letter "A". Unlike Team Magma, Team Aqua is run by a ruthless Commander Archie (Aogiri in the Japanese version).

Team Aqua are likened to a band of pirates and are experts in the field of Oceanography as well as water Pokémon. They only exist in the Hoenn region and do not recognize Team Rocket, unlike Team Magma. Team Aqua are the bitter rivals of Team Magma and are currently in a brief war with each other. Team Aqua's main goal is to expand the ocean for their water Pokémon, believing that by doing this they will be making the world a better place. To that end, they will awaken Kyogre from its slumber.

Team Aqua is slightly less vicious than Team Magma (and vice versa in the manga), and has more women working for it, which, combined with their increased environmental concern in Omega Ruby and Alpha Sapphire, implies they have a more progressive outlook. Their main thoughts about Ash Ketchum are not made clear, though he and the Team Magma Commander (who seemed to have a relationship of sorts with him once) do see him as a pest. Team Aqua is well known in the Hoenn Region, and they often blackmail local fishermen into telling lies. It has been verified that neither Team Aqua nor Team Magma will be appearing in any future Pokémon episodes. 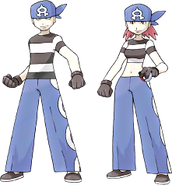