Tapu Koko's inner body is solid black in color with white markings on the chest and face. Yellow rings are present on its shoulders and yellow markings appear on its eyes as well. Its lower body is orange and consists entirely of five feather-like appendages. Tapu Koko's hair, similarly, is orange with a yellow tip in the shape of a mohawk. Its arms are solid with a two fingered hand on each in the shape of a bird's beak, which are connected to Tapu Koko's shell. The shell is a yellow, egg-shaped dome with multiple geometric patterns on the shell. On each side of the shell there are wings not to mention when its closed up it looks like a yellow head of a rooster.

Tapu Koko does not evolve.

Tapu Koko appears to be based on a totem pole stylized as a bird. With the Tapus being similar to the four major Hawaiian gods, Tapu Koko may be based on Kūka'ilamoku, the god of war, as Tapu Koko is shown to become fierce when angered. Tapu Koko also resides on Melemele Island and has yellow in its design. Melemele Island's real life counterpart, the island Oahu, has golden yellow as its official color.

Tapu Koko comes from tapu (Hawaiian for "holy") and kokō (the Hawaiian onomatopoeia for a rooster's call). 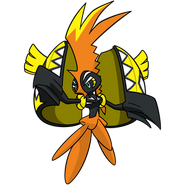 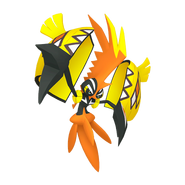 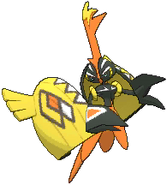 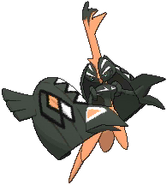 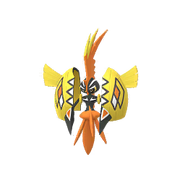