Tapu Fini's body is inside of its shell. It is black with blue fins and hair on its body. It has long arms with three webbed digits. It has purple around its arms with white stripe on its chest. Above its head is a white T-shaped marking. And it has purple above its eyes. Tapu Fini's shell is purple with a fin on the back and a spike in the front, which resembles a fish when closed.

Tapu Fini lives in deep fog. If somebody recklessly approaches it, it will punish them with terrible calamities.

It can control and purify water.

Tapu Fini appears to be based on a totem pole stylized as a swordfish. It may also be based on a mermaid or sea siren. With the Tapus being similar to the four major Hawaiian gods, Tapu Fini may be based on Kanaloa, a god of the ocean. Kanaloa is also often associated with the underworld, which is used as a place for when people's lives end. This concept of "end" could tie into Tapu Fini being the last Tapu in Pokédex order as well as it appearing on the final island the player travels to in Alola. Tapu Fini also resides on Poni Island and has purple in its design. Poni Island's real life counterpart, the island Kauai, has purple as its official color.

Tapu Fini comes from tapu (Hawaiian for "holy") and fin. 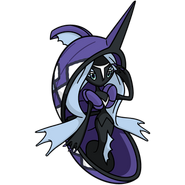 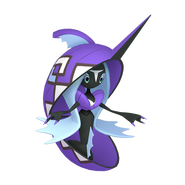