Tapu Bulu is black with white markings. It has a long tail with a yellow bell-like end and two arms that resemble yellow hooves. It has two horns on its head, and they have the shell with yellow tips on top. It's nose is yellow triangular and has a white ring-like structure through it. It has red around its two arms and under its eyes. Tapu Bulu can close its shell to resemble a bull's head.

It is a very lazy Pokémon. It rings its bell-like tail to signal its location.

It has the ability to grow and control plants.

Tapu Bulu first appeared in A Dream Encounter! along with Tapu Fini.

Tapu Bulu appears to be based on a totem pole stylized as a bull. It also sports a ring around its "nose" which may both serve as an aspect of its bull inspiration (as nose rings are often put on cattle) as well as possibly coming from the nosepiece jewelry found with some tribal people. With the Tapus being similar to the four major Hawaiian gods, Tapu Bulu may be based on Lono, a god of agriculture. Tapu Bulu also resides on Ula'ula Island and has red in its design. Ula'ula Island's real life counterpart, the island Hawaii, has red as its official color.

Tapu Bulu comes from tapu (Hawaiian for "holy") and bull. 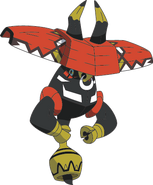 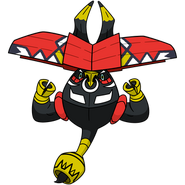 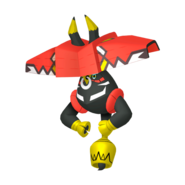 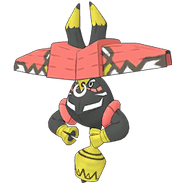 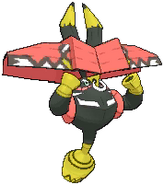 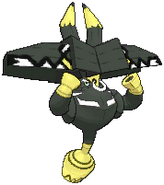