Tad is a character appearing in Pokémon: Adventures in the Orange Islands.

Tad met Ash when he, Misty and Tracey were traveling on Lapras. Challenging Ash to a battle after defeating Rudy, Tad sent Poliwrath against Ash's Pikachu, who was soon put to sleep due to Hypnosis. Ash sent Charizard, who disobeyed him. Poliwrath used Ice Beam and the battle was canceled, so Tad told Ash to have a rematch after he controls that "thing".

After Team Rocket was defeated, Ash and Tad had a rematch. Though Poliwrath proved to be powerful, Charizard defeated it using Seismic Toss, making Ash win the battle. Tad congratulated Ash and went off the island. 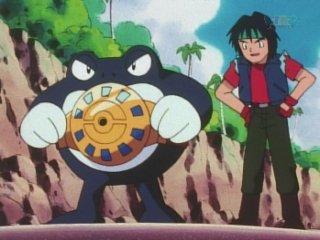 Add a photo to this gallery
Retrieved from "https://pokemon.fandom.com/wiki/Tad?oldid=1294332"
Community content is available under CC-BY-SA unless otherwise noted.