For the variant appearing in the games, see Tabitha.

Tabitha is a character appearing in Pokémon Adventures, who is an admin of Team Magma.

Tabitha is a man, with black hair.

Tabitha is a tall person, with dark eyes, who wears a red shirt, with the logo of Team Magma etched onto it. The shirt is with a hood, decorated with two black horns and a black dot in the front, and has a short red cloak on its back. Tabitha also wears a black uniform, underneath his shirt, with two pairs of gray stripes around his thighs. He also wears red pants, black shoes and a pair of red gloves with red bands around his forearms. He has long hair, which extends to his chest, and has a cleft chin.

Tabitha is a short, heavier man, whose red eyes are usually closed. He has short hair in a side parting, and wears a dark red ribbed jersey with yellow cuffs under a paler red and black zig-zag vest with a large V neck, red shorts over dark red ribbed long socks and large red ankle boots. Unlike others, Tabitha usually does not wear his hood on, which is decorated with yellow horns.

Tabitha believes strongly in Team Magma's goal to expand the land. Thus, he dislikes Team Aqua for their goal to expand the sea. Still, he has a soft, kind side, since he did try himself and Amber of Team Aqua resurface, after the submarine was damaged. After touching the Blue Orb, Tabitha temporarily became vicious and blinded by rage. Tabitha is also Shelly's rival when they conduct scientific research.

Along with Shelly, Tabitha worked with Mr. Stone in Devon Corporation. However, both Shelly and Tabitha didn't like Mr. Stone nor his "one man system" and quit their jobs.[1]

Tabitha and Courtney came on the Abandoned Ship to search for an item. Through a coil flip, Tabitha grudgingly went to search for the item. Tabitha eventually found Ruby and crushed him with his foot and proceeded onwards. He broke a door and found the Scanner. Soon, Tabitha met up with Courtney and reported a boy and a girl to be on the ship, who disappeared. With the help of Plusle and Minun, Ruby and Sapphire attacked Tabitha and Courtney. After getting electrocuted, Tabitha and Courtney sent Torkoal and Ninetales to attack, the latter burning the Double Team illusions off. During the battle, Ruby managed to snatch the diary, in which the password for the Scanner was written. Just as Tabitha was to crush Plusle, Ruby threatened to throw the diary into the sea. Tabitha didn't believe him, but Ruby proved him by nearly throwing the diary. So, Courtney handed Plusle over, who got empowered by Minun and attacked Courtney and Tabitha. Courtney dropped the Scanner, which Ruby obtained and jumped off the ship with Sapphire. However, since Ruby only obtained the Scanner's case, Tabitha and Courtney flew off with their Swellow. Tabitha was glad they got the Scanner, but Courtney was angry about the boy they couldn't see and promised to finish him off.[2]

Tabitha and Courtney returned to the Team Magma headquarters and reported their success. Blaise joined them and the three were ordered by their boss, Maxie, to make some trouble. The trio came to Slateport City and saw Captain Stern hanging out with Ruby and two other people. Tabitha's Torkoal went in and emitted smoke, allowing the admins to take them away.[3] After waking up, Ruby noticed Blaise's logo on his shirt and realized Courtney and Tabitha he fought before also belonged to the same team. He realized those two did not recognize him, as he had his glasses on the ship, was in the shadow and his face was smudged as well.[4]

Tabitha came to Mt. Chimney and found Flannery, who was trying to fire up the volcano. Tabitha explained she did not use enough fire power; Flannery mistook him for a villain, but was assured her he was on her side. Tabitha gave Flannery a piece of charcoal for her Magcargo and sent Torkoal to fire the volcano up.[5] However, this was but a temporary effect and made Tabitha curse Team Aqua, promising to pay them back for extinguishing the volcano. He promised to expand the land even further and complimented on Flannery's skills. Without further ado, he flew off with Swellow.[6] He returned to Maxie and reported despite his efforts, the volcano remained inactive.[7] Courtney encountered Ruby and explained Team Magma's admins' expertise - Tabitha was able to daze his enemies with smoke, Blaise could conjure illusions and Courtney could burn off everything to black crisps.[8] After the Gym Leaders' meeting in Fortree City, Wallace, Roxanne and Brawly knew they would have to face against Team Magma admins.[9]

Tabitha came with Maxie and met up with Team Aqua. He also commented how brutal it was how Archie attacked Matt and denied him to enter the submarine, due to the failure at Mt. Chimney. Once the submarine was fully operational, Tabitha dived into the sea.[10] The two teams split ways, once they arrived at the Seafloor Cavern. Soon, Maxie and Tabitha were glad to have found Groudon.[11] Tabitha managed to have his Torkoal burn Groudon and awaken it.[12]

Ruby thought of his journey and remembered the Team Magma admins he faced against. Realizing his mistakes, Ruby decided to join in the fighting against the villains.[13]

Since Maxie had difficulty controlling both the Red and Blue Orb, he gave the latter to Tabitha for holding. Amber noticed Tabitha and attacked him, while his Volbeat attacked Torkoal. Tabitha tried to go into the submarine, but Amber jumped on him and tried to restrain him. With Volbeat's Trick, Amber swapped Volbeat's Figy Berry with the Blue Orb. Volbeat gave the orb to Archie, who closed the submarine's hatch and let Amber and Tabitha drown in it.[14] Tabitha's Torkoal emitted Smog, to increase the submarine's buoyancy. Due to an explosion, the submarine was destroyed and Amber went unconscious, though Tabitha pulled him up to the surface. Blaise visited Tabitha and contacted Courtney to join them in battling against the Gym Leaders.[15] The three admins met up and faced Wallace, Brawly and Roxanne.[16]

Tabitha carried Wallace to the Lilycove Department Store, where they started the battle.[17] Wallace managed to have his Whiscash, Phillip, tickle Torkoal, while Luvdisc, Elizabeth, used Water Sport to reduce its fire-type attacks. Tabitha, however, became wild with rage and tried to attack Wallace personally. Wallace tried to escape, but Tabitha grabbed him and tossed him away. Fortunately, Steven arrived and his Metagross attacked Tabitha, in whom Steven was certain the Blue Orb possessed his mind, even if he held it for a little bit.[18] After Steven dismissed the Elite Four, Tabitha and Torkoal rose up to attack, but they were hit by Steven's Metagross. Steven commented Tabitha went mad with the touch of the Orb.[19] After Metagross defeated them, Tabitha and Torkoal were lying unconscious.[20] Scott reported to Norman about the battles between Gym Leaders and Team Aqua and Magma admins.[21]

Maxie and Archie picked up the Red and Blue Orbs and intended on betraying their subordinates and crush them, including any authority to rule the world.[22]

After the crisis was over, Tabitha came to Lavaridge Town and visited Flannery, wanting to get into the hot springs.[23]

Tabitha, along with Team Aqua and Magma admins, were found at the Battle Frontier, where they were intimidated by the Frontier Brains.[24]

Tabitha spoke with Shelly, Mr. Stone and the Trick Master, for they all thought of various ways to strike the meteorite and protect the lorekeeper.[25] Eventually, they saw how everyone launched their attacks and shattered the meteorite. However, Tabitha and Shelly were in shock the life support system of the suits Ruby and Sapphire wore had been cut off. In the end, Tabitha and Shelly watched how Ruby and Sapphire descended down with Rayquaza back to Sootopolis City.[26] 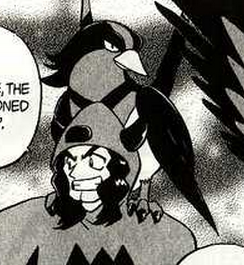 Retrieved from "https://pokemon.fandom.com/wiki/Tabitha_(Adventures)?oldid=1270735"
Community content is available under CC-BY-SA unless otherwise noted.