Tabitha is a Team Magma Admin in Ruby, Emerald and Omega Ruby. He is Maxie's right-hand man.

Tabitha is a tall person, with dark eyes and black hair, who wears a red shirt, with the logo of Team Magma etched onto it. The shirt is with a hood, decorated with two black horns and a black dot in the front, and has a short red cloak on its back. Tabitha also wears a black uniform, underneath his shirt, with two pairs of gray stripes around his thighs. He also wears red pants, black shoes and a pair of red gloves with red bands around his forearms.

Tabitha's appearance remains the same as it is in Ruby and Sapphire.

Tabitha is a short, heavier man, whose red eyes are usually closed. He has short black hair, with a fringe. He has short hair in a side parting, and wears a dark red ribbed jersey with yellow cuffs under a paler red and black zig-zag vest with a large V neck, red shorts over dark red ribbed long socks and large red ankle boots. Unlike others, Tabitha usually does not wear his hood on, which is decorated with yellow horns.

Tabitha is seen as the "brains" of the two Team Magma Admins. He is also considered as Maxie's right hand in Pokémon Emerald as Tabitha usually stands beside him at all times, while Courtney stands alone. In Pokémon Ruby and its remake, Tabitha is seen as a humorous person, as he usually chuckles and laughs, before and after battles. 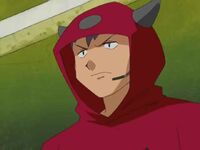 Tabitha in Pokémon the Series (anime) 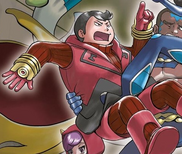