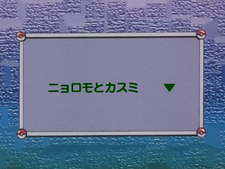 The Stun Spore Detour (ニョロモとカスミ Poliwag and Misty) is the 30th episode of Pokémon: Adventures in the Orange Islands.

As Ash prepares for the Orange League competition, Tracey sketches a Vileplume. Then Ash trips on a rock and he and Tracey get stuck in Vileplume's head. In self-defense, Vileplume uses Stun Spore, which Ash and Tracey inhale. Misty takes them into a cabin and takes care of them. Tracey has Misty look up the cure for Vileplume Stun Spore Inhalation, which turns out to be boiled Salveyo Weed. It was up to Misty to save the day so she and Togepi set off to find the plant that could save her friends. However, Ash and Tracey aren't the only ones struck by this affliction. Jessie has the same ailment too and it was up to James and Meowth to save her. Who will get the Salveyo Weed first: Misty or James and Meowth?

Ash tells Pikachu they are on the hot streak for the League, but get soaked by the wave. Tracey draws a Vileplume, remarking its large petal. Ash and Pikachu go to him. Ash tells he could help by his training and trips over a rock. However, he tackles Tracey accidentally and they get stuck in Vileplume's head. Things get worse when Vileplume uses Stun Spore, so Pikachu goes to warn Misty. Misty sees a Pikachu and thinks he and Ash went for a training at the beach. Suddenly, she sees Tracey and Ash moving oddly, and is told what happened. She looks through her bag, but sees she has bandages. She looks at the map, but sees the nearest Pokémon Center is 30 miles away on an island. She believes they need to find another way. Pikachu goes to electrocute them, but Misty stops him saying that won't work.

She sees Ash and Tracey have a fever, so gets a towel wet and places on their heads. Tracey (weakly) tells Misty to look for the antidote on the Pokédex. She learns from it that having a Salveyo Weed should cure them. She learns that she can find it where Vileplume and Poliwag live. She goes to get it, leaving Pikachu to take care of Ash and Tracey. James has Meowth on his shoulders to get fruit. Meowth gets it, but the branch they were on breaks and they fall down. James and Meowth return to Jessie, who is sick, but thinks she is looking better. Meowth asks why did she need this specific apple, so Jessie responds that if she wakes up from the fever dreams, she can gaze upon something even more red than her skin. She asks for an ice cream, but James and Meowth refuse. Jessie cries, telling that she could be gone like a lonely leaf. James and Meowth know that it is only a Stun Spore, as she ran through a flower field and landed on Vileplume's head. James remembers that when he was affected by Stun Spore, his grandpa would boil Salveyo Weed from a lake. Jessie gets upset and kicks James, then goes back to bed.

As Misty searches for the Salveyo Weed, Pikachu places the wet towel on Ash's head. James and Meowth are searching for the Weed as well, although are dressed in strange clothes. Meowth tells people would get suspicious if they wear Team Rocket uniforms, then responds that he is doing his best when James asked if he could've brought something more flattering. They soon hear a Poliwag and see Salveyo Weed on its tail. James sends Victreebel to get Poliwag, but gets chased. Victreebel strikes, but Poliwag evades and retaliates using Water Gun, although Victreebel defends itself. Victreebel uses Razor Leaf, but Poliwag jumps. Meowth goes to catch Poliwag with a basket and succeeds. James asks Meowth if they can change these costumes, but Meowth responds to help him with Poliwag. Poliwag gets Meowth off its back and runs away.

As Misty searches, she sees a Poliwag, who goes behind her, as James and Meowth appear. They order the twerp to give Poliwag, but Misty refuses, as Poliwag does not want to come with them. Victreebel attacks, so Misty sends Goldeen. Victreebel uses Razor Leaf and misses, as Goldeen goes into the lake. Victreebel goes to dive, but Goldeen emerges and uses Horn Attack on it, followed by a Fury Attack. James calls it back, making Misty and her Pokémon happy they won, while Meowth is angry as Victreebel lost. James sends Weezing and Misty sends her Staryu, who tackle each other. Misty's Staryu gets surrounded by Smog, but Staryu spins, using Double Edge to hit Weezing. Meowth goes to battle, so Misty calls Staryu back and sends Psyduck. Meowth scratches Psyduck, then bites it on the head. This causes Psyduck to get a headache, making James and Meowth to be sent into the woods.

James and Meowth are saddened to think what would Jessie feel if they came without the Weed. James thinks people would think that kids do not think always about Pokémon, giving Meowth a good idea. Misty treats Poliwag with a cream, making Poliwag like her and tickles Togepi using the tail. Misty asks it if there is a Salveyo Weed. Poliwag goes into the lake and returns with the weed. Seeing there is more weed, Misty sends Staryu and dives, finding more weed. Collecting the weed, Misty takes it and says goodbye to Poliwag. Poliwag wants her to stay, but Misty reminds it her friends are sick and need the weed. Poliwag wants to come, so Misty allows it to go with her. Pikachu sees Tracey and Ash are still sick, then goes to the window, worried about Misty.

Misty tells Poliwag it'll meet her friends and their Pokémon. James and Meowth see the twerp has the weed and Poliwag, but James knows she soon won't have any of that. Misty follows the road and sees many clothes, food, perfumes etc., but reminds herself she needs to help her friends. Meowth does not understand why she did not fall for the trap, as a girl likes these things. James believes they shouldn't have placed things Jessie likes, so Meowth knows the next plan will be disguised much better. As Misty, Togepi and Poliwag continue wandering, they encounter a woman and her child. The woman asks for the Salveyo Weed, as her child inhaled Stun Spore and cannot move or smile. Meowth tells that they should help this baby, making Misty see this is a ruse made by Meowth and James. Meowth clarifies they'll do whatever it takes to get the weed and give it to Jessie. James sends Weezing, who tackles Poliwag. However, Poliwag retaliates using Double Slap. This causes James and Meowth to fall in the carriage and they fall down a cliff. James and Meowth climb up and see the weed the twerp left. Elsewhere, Misty explains to Poliwag James and Meowth wanted the weed to cure Jessie, so she left it for them. James and Meowth go to Jessie and see the other two twerps are lucky to have her as a friend.

Misty came back to house and boils the weed for Ash and Tracey. Misty gives Tracey and Ash cups of boiled Salveyo Weed. Jessie tells James and Meowth to hurry up, even if told to be more generous. Jessie feels better and tells Meowth and James if they hurry, they can capture Pikachu. James and Meowth are saddened, as they need to attack the one who wanted to help her friends like they did. Ash and Tracey feel better, but duck as Jessie's Arbok attacks. Arbok and Pikachu battle, with Pikachu evading Arbok's Poison Sting. Jessie asks Meowth and James why are they not battling, so they respond that they don't want to mess up her style, wanting to stay out of this battle. With a Thundershock, Pikachu attacks Arbok and send it flying into Jessie, who is also electrocuted, so James and Meowth pick her and Arbok up, then retreat. Tracey and Ash thank Misty for getting the Salveyo Weed. Misty tells it was Poliwag who helped her get the Salveyo Weed. Ash thanks her for being gentle when he was sick, but Misty responds not to get used to it. With this concluded, the heroes ride Lapras to the Orange Island League while Misty has caught herself a Poliwag.

Ash trips over the rock

Tracey and Ash get affected by Stun Spore

Meowth got an apple

Psyduck begins to have an headache

Misty gets distracted, for a while

Meowth and James, disguised once more

Misty tells Ash not to get used to her kindness
Add a photo to this gallery
Retrieved from "https://pokemon.fandom.com/wiki/TB112:_The_Stun_Spore_Detour?oldid=1330351"
Community content is available under CC-BY-SA unless otherwise noted.