The Wacky Watcher! (コイキング！しんかのひみつ！！ Magikarp! The Secret of Evolution!!) is the 29th episode of Pokémon: Adventures in the Orange Islands.

As Ash admires his new badges he, Misty and Tracey notice a submarine surfacing. Out comes an man who is studying the ocean and soon schools of Magikarp rush in. The gang heads to Rind Island and finds the school swimming upstream. They soon encounter the man, who is Quincy T. Quackenpoker, a Pokémon watcher who dedicates his life to the study of Magikarp, and volunteers Ash and co. to be his assistants. The gang learns many things about Magikarp, however Team Rocket has a plan to use the Magikarp and evolve them to Gyarados to rule the world? Will their plan succeed? And how many Magikarp does it take to screw in a light-bulb?

Ash admires his four badges as he, Misty and Tracey ride Lapras. Tracey fills a glass with sea water, telling Misty he is going to use that for his research. Suddenly, they see something big approaching. A submarine emerges from the water and a man appears, telling there is something big to happen, although the heroes don't see whatimportant could happen. The man sees they are here, as Lapras and the gang swing around. The heroes soon see Magikarp. Tracey notices some bands around their tail. The man predicts where they will go and sails away. Tracey guesses the Magikarp are going to a deserted Rind Island, so Lapras sails to that island.

The heroes see Magikarp are here, but so is the man, who gives them luggage to carry around. The heroes follow the man and Misty asks who is he. The man tells he is Quincy T. Quackenpoker. Misty responds that is an unusual name. Quincy clarifies he is a Pokémon Watcher that studies Magikarp. Tracey realizes he is a famous Watcher and goes to study Magikarp. One of them splashes water on Tracey. Quincy tells the first thing a man learns by studying Magikarp is that he needs waterproof pen. As Misty and Ash tell that watching Magikarp is boring, Tracey notices Quincy setting up a camera, analyzing Magikarp and their stats. Tracey asks Quincy if he put the bands on Magikarp's tail. He put the bands for Magikarp that have gone away from Rind Island: red is for one, blue for two and yellow for three years away. He acknowledged that Magikarp return to this place of birth after going away from the island, allowing him to conduct the study.

Quincy asks Tracey if he enjoys watching Magikarp as a Watcher. Tracey confirms this, although wonders how he'd knew he was a Watcher. Quincy clarifies that he sees him with binoculars and the sketchbook, thinking a Pokémon Watcher is also a people watcher. Quincy looks in Tracey's sketchbook and sees his future is in front of him, but not behind. Team Rocket watch them. James and Meowth go to get Pikachu, but Jessie stops them. She believes if they capture the Magikarp and evolve them into Gyarados, they would be unstoppable. James and Meowth agree to this plan and go, although they shout for Jessie, who lags behind. The heroes see the Magikarp go up the waterfall. Quincy admits that 50% manage to get strength to get up. The heroes ask what happens to those that don't, and Quincy responds they fall down, but keep on trying, just like the three years he had to make his moustache.

Team Rocket are prepared to catch the Magikarp. James asks if it's better to catch them using Poké Balls, and Jessie reminds him that Poké Balls cost money, which is something they are out of.

James swings and gets a Magikarp, making Jessie and Meowth impressed. However, Magikarp slips out of the net, then bounces into the river. Team Rocket scream and Ash hears them. Misty thinks that his stomach growls. Ash believes someone is in trouble, but Quincy responds they'll be in trouble if he does not see the Magikarp evolve, making the gang baffled. At the lake, Ash wonders when they're going to evolve. Quincy tells him to be patient, although he knows that Magikarp shouldn't evolve today, as time needs to pass for that to happen. The heroes have dinner and Ash offers food to Pikachu. Quincy sees Ash's bond with Pikachu, making it quite shocking, although Ash tells him he laves shocking to Pikachu. Misty feeds Togepi and Quincy pats it on the front spike, telling Misty Togepi love when they are patted there. Tracey acknowledges Quincy does not know only about Magikarp. Quincy confirms, but tells Magikarp interest him the most, as he saw one getting in his pyjamas one day, although he still does not know how it got there.

As Misty and Ash sleep, Tracey displays Quincy a theory that Magikarp jump out of the water to find the way to the Island. Quincy sees it is an interesting theory, but knows one Magikarp cannot jump at all, but manages to get back to the island. Tracey sees Magikarp are much more mysterious than they know. Ash and Misty wake up and see the Magikarp acting strange. Quincy fells the Magikarp know something exciting is going to happen. However, Magikarp swim away from Team Rocket, who take them. After catching a lot of them, the submarine sinks, as there are too many Magikarp in it. They emerge out and throw the Magikarp away. Ash, Tracey and Pikachu catch the Magikarp, but this caused a distraction, as Team Rocket steal Pikachu. Ash goes to order a Thunderbolt, but Quincy warns them that would electrocute Magikarp as well. Ash kicks a Poké Ball, sending Bulbasaur out. Bulbasaur uses Vine Whip to get Pikachu, but misses, so Ash calls it back.

James gets upset, as a Magikarp bit his head. Jessie and Meowth attempt to get Magikarp off. Quincy comes to them and pats Magikarp, telling it needs to be treated gently. The Magikarp likes the patting and releases James' head and Team Rocket celebrate at this event. However, Ash took Pikachu back and with Tracey and Quincy, go down the submarine. Suddenly, the Magikarp glows, so Quincy lets it go in the water, making the entire lake glow (making Team Rocket blast off in a whirlpool) as the Magikarp evolve into Gyarados. Quincy asks of Tracey to count ones with red and blue bands. At an end of a cliff, they see Magikarp and Gyarados departing away. Tracey and Quincy counted that 70% of Magikarp evolved. Quincy sees that he will be able to unravel the mysteries of Magikarp evolution, while Tracey had the honor of working with the greatest of the Pokémon Watchers. Quincy tells him if he continues, he'll be able to be great as well.

The sun rises. Ash believes if he and Pikachu work hard, they'll be able to win the League. Misty plans to cheer for him with Togepi. Team Rocket, however, regret their actions, as Gyarados surround them...

"Ah, company. You're here just in time for the rush hour." - Quincy
"Huh?" - Ash, Misty and Tracey
"If my observations are correct, we're about to see one of the most astounding scenes ya ever seen on the seas. Now we'll see what we shall sea." - Quincy

"If my calculations are correct, I know exactly where the Magikarp are headed. But with heads like that, I suppose they don't have much of a choice. Oh well, here I go." - Quincy

"I'm a Pokémon watcher and I've dedicated my life to the study of Magikarp." - Quincy
"I knew I recognized your name. If a famous Pokémon watcher like Dr. Quackenpoker thinks Magikarp are worth a lifetime of study..." (Tracey gets out his sketchbook) "there must be something I can learn from them too." - Tracey
"The first thing you learn from watching Magikarp is always use a waterproof pen." - Quincy after a Magikarp splashes Tracey in the face
"Thanks, doctor." - Tracey
"Come on. You can't lie there like a lax all day. We've got observations to make." - Quincy

"Would somebody please tell me what's so great about watching Magikarp?" - Misty
"I don't get it either." - Ash
"Pika." - Pikachu
"They're boring. If you've seen one Magikarp, you've seen them all if you ask me." - Misty

"I see, it's a machine that records the number of Magikarp as they pass by." - Tracey
"It does much more than that: It measures and analyzes 32 factors, including fin length, bone structure, muscle density, not to mention size-weight ratios and oxygen efficiency quotients." - Quincy
"Size-weight ratios and oxygen efficiency quotients?" - Ash
"I asked you not to mention those, didn't I?" - Quincy
"But I wonder why the Magikarp go away." - Tracey
"I'm getting there. The Magikarp are born in the waters around this island, but swim out to sea as they mature. But once a year, no matter where they are, thousands of Magikarp return here to the place of their birth, and I return so I can study them all. Tracey, I'd imagine a young Pokémon watcher like yourself must find all of this pretty interesting." - Quincy
"Sure, but how'd you know I was a Pokémon Watcher?" - Tracey
"Well, with that sketchbook you carry around with you, and those binoculars, I just put two and two together. Clever, eh?" - Quincy
"I've hardly ever seen something that clever." - Misty
"Well, thank you. But it's only logical that a skilled Pokémon watcher would also be a skilled people watcher. Say, now that the plot has come to a screeching halt, why don't I take a look at your sketchbook." - Quincy
"Oh, sure. Go ahead." - Tracey
"Ah, excellent. I see a great future ahead of you, young man." - Quincy
"Do you... do you really think so?" - Tracey
"Well, you certainly don't have a future behind you." - Quincy

"Well, if you ask me, there's nothin' magic about a bunch of Magikarp. I say we make Pikachu the catch of the day." - Meowth

"Jess, wouldn’t it be easier to catch them in Poke Balls?" - James
"James, Poke Balls cost money, which is something we’re out of!" - Jessie

"My studies indicate that 50% of the Magikarp are still too weak to swim all the way up the waterfall." - Quincy
"What happens to the ones that don't make it?" - Tracey
"They do what that one there is doing — they keep trying." - Quincy

"Everything takes time, Magikarp — took me three years to grow this moustache." - Quincy

"You'll be the ones in trouble if I'm too late to see the Magikarp evolve." - Quincy

"You should mind your P's and Q's and Pikachu." - Meowth 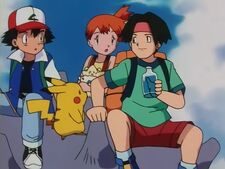 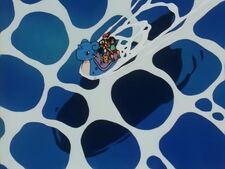 A giant thing swims through 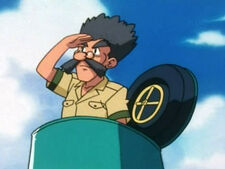 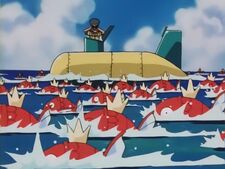 The Magikarp swim by 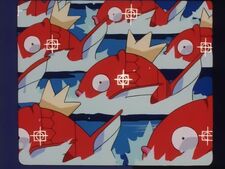 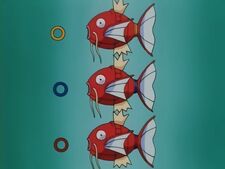 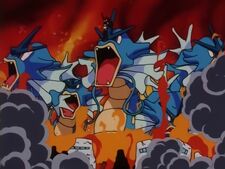 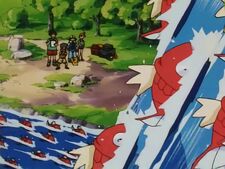 The Magikarp go up 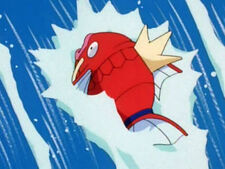 Magikarp goes to climb up the waterfall 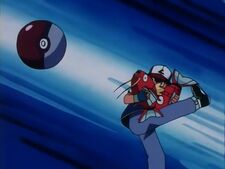 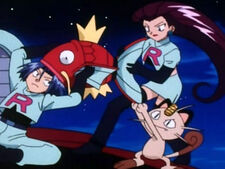 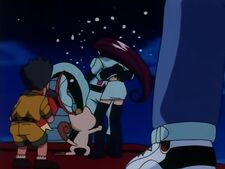 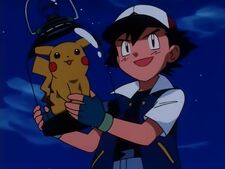 Ash got Pikachu back 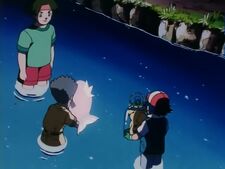 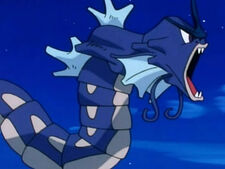 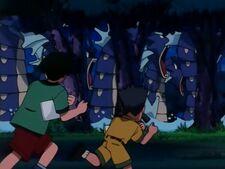 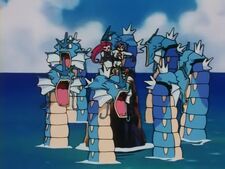 Team Rocket got surrounded
Add a photo to this gallery
Retrieved from "https://pokemon.fandom.com/wiki/TB111:_The_Wacky_Watcher!?oldid=1311275"
Community content is available under CC-BY-SA unless otherwise noted.