Pokémon Double Trouble (タッグバトル！さいごのジム！！ Tag Battle! The Last Gym!!) is the 28th episode of Pokémon: Adventures in the Orange Islands.

Ash and Co. arrive on Kumquat Island where Ash hopes to win his final badge. As a woman on the beach advertises her hotel, she notices Ash, rushes up to him and nearly hugs the life out of him because she thought Ash was her son. After the confusion was cleared up Team Rocket appears in a giant robotic Rhydon. The woman calls out her Alakazam and is revealed to be Luana, the Kumquat Gym Leader. After Team Rocket was defeated (again), Ash challenged Luana to a gym battle and she accepted his challenge. The rules were to use two Pokémon at the same time. Can Ash adjust to this new style of battling and win his final badge?

The heroes arrive to Kumquat Island, where Ash is supposed to challenge the last Gym Leader. Tracey and Misty plan if he fails, they'll be in a nice place for a while. Ash tells them why they have no confidence in him. Tracey and Misty tell (by a not-so-confident voice) they support him, so Ash and Pikachu go to prove themselves. A woman advertises her hotel. Misty tells them to hurry up to get a room, but Ash tells her they are here for his match. Tracey advises him to relax and go for a swim. The woman who advertises the hotel sees Ash and tells it is her boy. She runs up and hugs him heartily. Ash responds he does not know her, making the woman sad, as she hugs Ash even more.

Ash tells he has a mother and it is not her. The woman apologizes, thinking Ash was her boy, Travis. She remembers the day Travis left with his Pikachu, wanting to become a Pokémon Master. Ash tells it is what he wants to be and the woman remarks that fact. Suddenly, a giant robo-Rhydon appears, as Team Rocket want Pikachu. Arbok and Lickitung run on a track to power the robot up. Jessie declares a Hyper Beam while Weezing uses Smog. Meowth sees James did not taught Weezing such an attack to use. Nevertheless, Weezing uses Smog, making Jessie pleased panic is spread, but James reminds her they came for Pikachu. Ash tells them to stop, as hurting innocent people is not fair. Jessie tells that it is natural it is not fair and has Arbok to use Poison Sting. The woman declares her Alakazam, who uses Reflect to protect Ash.

The woman orders Team Rocket to get out and not to come back. Ash tells her Team Rocket can get dangerous, but the woman is confident, as she can be dangerous, too. Jessie tells the woman to get out, calling her grandma. Misty tells Jessie she should not call her grandma, calling Jessie a witch, making her enraged. James and Meowth think that Jessie is an expert on ages (unlike the twerp), but Jessie gets even angrier. Ash tells the woman that they can take care of Team Rocket, but the woman replies a member of the Orange Crew should take care of these things herself, making Ash surprised she is the Gym Leader. Weezing uses Smog, but the woman and Ash run away, while Alakazam uses Psychic to shut the robo-Rhydon's mouth, causing Team Rocket to cough at Weezing's Smog, which is inside the machine. Ash sends Charizard, who uses Take Down on the robot. James accidentally pushes a button, causing Arbok to use Acid, burning a hole in it. Charizard attacks with a Flamethrower through the hole, making Team Rocket blast off. The woman is impressed by Ash's skill. Ash challenges her to a battle and the woman accepts, although promises she won't go easy on him.

The heroes arrive to a hotel and Misty asks if there is a Gym inside. The woman confirms and Tracey sees it is a good combination, as Ash can have his battle and they some relaxing time. The woman tells her staff to prepare a room for their guests. After passing an area where trainers leave their Pokémon for training, the heroes arrive to the battlefield. The woman, Luana, tells that they can have a Double Pokémon Battle. If one team loses, the other wins. Tracey sees it is somewhat like tennis. Ash is confident he can win this. Luana gives him a strike, telling it is that attitude that can keep a trainer in shape, although Ash coughs at that strike. Luana sees it is that attitude her son Travis had. Luana tells tomorrow is the battle, but lets them use the hotel. In the tub, Ash thinks what Pokémon should he use. Tracey tells it might be Alakazam Luana will use, so Ash thinks a Ghost or a Bug-type Pokémon should defeat her. Misty tells with neither of those, he is in hot water. On that statement, Ash falls in the tub and gets overheated. Misty and Tracey pull him out and tell he shouldn't warm up for tomorrow.

Next day, Ash and Luana have the battle. As it is a Double Battle, Luana sends Alakazam and Marowak, while Ash chooses Pikachu and Charizard to fight them, thinking his combo will work. However, Pikachu and Charizard argue with each other. The fight begins and Pikachu runs, while Charizard uses Flamethrower. Marowak and Alakazam dodge, but Charizard burns Pikachu, much to Ash's disappointment. Charizard goes to tackle Alakazam, but gets stopped by Psychic. Pikachu uses Thundershock, but uses it on Charizard, making Ash angry. Luana tells Ash his Pokémon should work as a team. Marowak uses Bonemerang, hitting Charizard with it. Alakazam uses Psychic and pushes Charizard down, allowing Marowak to hit it with Bonemerang. Pikachu sees Charizard getting hurt, while Alakazam uses another Psychic attack. To help Charizard out, Pikachu electrocutes Alakazam and the Psychic attack is stopped.

Ash sees Pikachu and Charizard are friends now. However, Luana reminds him about the match, as Marowak uses Body Slam on Pikachu. However, Pikachu gets stopped by Charizard's wing. Charizard flies with Pikachu on its back. Marowak uses Bonemerang, but misses. Alakazam goes to use Hyper Beam on Charizard. Charizard goes up, as Marowak's Bonemerang hits Alakazam. The Hyper Beam gets on a new target - Marowak. With that, Marowak and Alakazam are defeated. Ash hugs Charizard and Pikachu for victory, while Tracey and Misty congratulate him on this fine battle. Luana goes to Ash and presents the Jade Star Badge. Luana tells Ash he can compete in the Orange League. To get the honorary trophy, he needs to defeat the Head Leader, the best trainer in the League. Misty asks her if Ash has a chance to defeat the Head Leader. Luana responds if he works with his Pokémon together, so now they now he can.

As they depart, Luana tells Ash if he sees her son, he should tell him that his mother misses him. Ash promises this and waves with Misty and Tracey goodbye for their departure. Meanwhile, Team Rocket are depressed, as they wrecked the boss' robot and plan what to do next.

Ash gets angered by Tracey's and Misty's statements

The woman advertises her hotel

Luana saw her son departing away

Arbok and Lickitung power the machine up

Jessie gets angered when Misty called her an "Old Witch"

The machine goes to explode

The staff greet the heroes and Luana 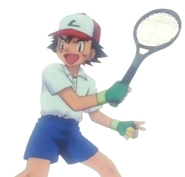 Ash, as a tennis player, in his fantasy

Ash and Tracey plan the tactic

Pikachu and Charizard move together

Ash got the Jade Star Badge
Add a photo to this gallery
Retrieved from "https://pokemon.fandom.com/wiki/TB110:_Pok%C3%A9mon_Double_Trouble?oldid=1312178"
Community content is available under CC-BY-SA unless otherwise noted.