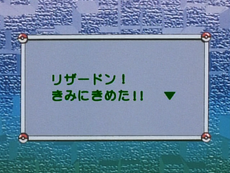 Charizard Chills (リザードン！きみにきめた！！ Charizard! I Choose You!!) is the 25th episode of Pokémon: Adventures in the Orange Islands.

The gang meets Tad, an experienced Pokémon trainer. Tad uses his Poliwrath and puts Pikachu to sleep. Ash sends Charizard, but due to its disobedience, Charizard does not listen to Ash. Due to this, Poliwrath manages to freeze it using Ice Beam. Ash attempts to get it warmer, which causes Charizard to gain some respect for its master. When Team Rocket appear, they take Pikachu, but Charizard and Ash stand together, causing Charizard to gain new power!

As the heroes ride Lapras, a boat speeds up. A man shows up and Misty tells to apologize to Togepi, as he could've hurt it. The man apologizes, as it makes Misty's face look like a Tentacruel, while Misty wishes she could be pretty like it. The man recognizes Ash as one who got the badge from Trovita Island. The man tells that he wants to get in the Orange League and heard Rudy telling him Ash used pure power to win. Misty tells Ash he has luck instead of skill, but he responds to her he won three badges. Tad tells he likes strong challengers and wants Ash to battle him. Ash accepts and they go to a nearby island to battle. Team Rocket make a robot and Meowth sees a boat with twerps on it.

Ash sends Pikachu and to Ash's surprise, Tad sends Poliwrath. Misty sees Poliwrath has a belt. Tad tells he defeated the trainers back home and won the Championship. Tracey warns Ash this might be a trick. Pikachu starts with Thunderbolt, but Poliwrath surrounds Pikachu with Double Team. Pikachu hops and banishes the illusions, using Thunderbolt to electrocute Poliwrath. Poliwrath uses Hypnosis, putting Pikachu to sleep, defeating him using Water Gun. Misty and Tracey see Tad is experienced to let Ash use Pikachu's energy first, then putting it to sleep. Tad says it is not a challenge to match the type advantages, but it is the surprise that can turn the tide of battle. Ash tells if he likes surprises, he will send his secret weapon. Misty and Tracey are worried as Ash sends Charizard.

Ash gets terrified and promises to get Charizard out, using a rock to smash the ice. Tad calls Poliwrath back. Charizard gets its head freed, but its body is still frozen. Tad tells Ash he will be glad to have a rematch... if he controls "that thing". Team Rocket saw the battle and fell how it is to lose. Meowth sees they will be here, so they need to conduct the plan. Later, Ash rubs Charizard to get it warmer, but fails. Pikachu points at his hands and Ash sees they are red. Ash is not bothered and tells Pikachu to rest, but Pikachu does not want to and helps Ash to get Charizard warmer. Charizard fells what is going on and gets upset. Misty and Tracey appear and Misty tries to help Ash, but Tracey stops her. Ash tries to calm it down, but Charizard suddenly stops and falls down.

To get it warmer, Ash rubs his hands on Charizard, while Tracey goes to get more wood and Misty goes to get a blanket. Ash sees Charizard smiling a bit and Misty wraps Charizard with a blanket, telling Ash he'll be faster by rubbing with it. Ash tells that as long as Charizard gets better faster, everything should be good. Misty went to sleep while Ash and Tracey rub Charizard. Tracey fells Charizard is warmer, but Ash does not want to get the flame on its tail doused out. Charizard wakes up and goes to use a move, but it is still cold. Ash warns it must rest and after that he can even use Flamethrower on him. Misty sees Charizard is getting better, but throws in more wood in the campfire. Ash tells Charizard he may not be the greatest trainer and makes a lot of mistakes, but does his best and knows he is getting better. Ash wants Charizard to understand that he wants to be a good enough trainer to have a battle side by side.

Charizard remembers his memories with Ash. Pikachu sees the flame on its tail is getting bigger. The heroes rub Charizard, though everyone gets exhausted a bit. During the morning, Charizard wakes up and sees Ash on his back asleep. Charizard stood up and shows the heroes the flame on its tail - bright as it should be. Suddenly, the earth shakes. Tad sees there is trouble. Pikachu falls in Team Rocket's trap, who gets imprisoned in an electric-proof room. Team Rocket dig in, so Ash runs to get them. Charizard accompanies him and they go in the tunnel. Team Rocket are happy their plan works, but get stopped by Charizard. Charizard goes to use Flamethrower, but Ash warns him he'll burn Pikachu. Instead, Charizard kicks the drill and gets Pikachu out. Team Rocket use the buzzsaw and while Charizard dodges, Ash and Pikachu fell down, unconscious.

Ash thanks Charizard and hugs it. Tad congratulates Ash and hopes they'll battle in the Orange League. Ash wishes that, too, and they shake hands. The heroes wave goodbye to Tad, who goes on the ship away. Ash thinks he'll defeat anyone and pushes Charizard (friendly) away. Charizard funnily uses Flamethrower on them, teasing them as they goes. Tracey and Misty ask of Ash to control Charizard, but Ash tells he can take the heat.

"I'll be glad to have a rematch with you Ash, when you finally learn how to tame that thing." - Tad

"We've been together since you were Charmander and then when you evolved into Charmeleon and all I want to do is to be good enough for you so we can battle side by side, as a team." - Ash
(Regarding Charizard) "It's still cold!"-Misty

Poliwrath with the belt

Charizard gets hit by Ice Beam

Ash got his hands bruised

Charizard's flame on the tail gets bigger

The heroes warm up Charizard

The heroes escape Charizard's Flamethrower
Add a photo to this gallery
Retrieved from "https://pokemon.fandom.com/wiki/TB107:_Charizard_Chills?oldid=1330346"
Community content is available under CC-BY-SA unless otherwise noted.