A Way Off Day Off
みなみのしまだよ！ぜんいんしゅうごう！ 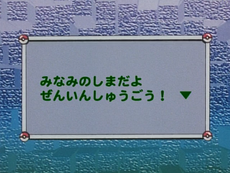 A Way Off Day Off (みなみのしまだよ！ぜんいんしゅうごう！ It's the Southern Island! Everyone Gather!) is the 18th episode of Pokémon: Adventures in the Orange Islands.

The gang arrives on a small island and decides to take a break. Charizard and Scyther have an argument. Later, Ash thinks about how different Cissy and Danny were as Gym Leaders. As they were sleeping, Team Rocket steps in and tries to steal their Pokémon. Can Charizard and Scyther set aside their differences and help their friends?

The heroes are, as always, riding Lapras. They hear Ash's stomach growling and Misty asks how can he be hungry only sitting. Ash replies he is thinking what to eat. Pikachu sees an island and Lapras goes to that place. As they go, Jigglypuff appears and smiles. Ash and Misty let Pikachu, Togepi, Goldeen, Staryu and Lapras to have fun. Suddenly, something gets dropped on Ash and Tracey sees it is a fruit. Ash sees a Farfetch'd was carrying it. A flock of Farfetch'd fly, whole Ash notices Togepi and Pikachu carry fruit. Misty and Ash eat them, but are disgusted by its sour taste. Tracey laughs, as the fruit needs to be picked correctly. Tracey gives Ash fruit. Ash tastes it and is amazed by its taste. So, the heroes decide to get a day off, sending their Pokémon to enjoy the day.

Bulbasaur and Squirtle are surprised by Scyther. Ash tells that Tracey caught Scyther, but Scyther does not seem much for greeting. However, after Togepi taps it on the leg, Squirtle, Psyduck and Bulbasaur see it is friendly and greet it. Ash tells Charizard to greet Scyther. Charizard is uninterested, making Ash to be disgusted by its disobedience. Charizard burns Ash and the flames go to Scyther, who evades it. Scyther and Charizard stare at each other. Ash tells them no fighting, although they look in other direction. Misty and Tracey see this will present problems. Team Rocket enjoy the day and Jessie says they won't even steal the twerps' Pokémon. However, they get surprised seeing the twerps' Pokémon around and plan to take them. James tells Jessie she said to forget stealing this day. Jessie replies that they need to capture the Pokémon so that the boss will forget their debts and Meowth thinks they can go on a real vacation after that.

The gang comes and sees Scyther and Snorlax having a debate. Ash tells Snorlax it won't take them much to prepare food. Suddenly, Jigglypuff appears and sings, causing everyone to go asleep and forcing Jigglypuff to do another series of face art. After waking up, the heroes let Snorlax rest for a while. Later, they have a picnic. Misty asks if there is cheese, bologna, or peanut butter. Tracey replies there is none of it and Ash tells Misty he will have her sandwiches. She declines his offer by stating that she just never had fruit sandwiches before. Suddenly, Snorlax appears and eats all sandwiches. The gang cleans the dishes and Misty sees Snorlax does not eat as much as it usually does. Tracey believes it does not waste much energy when inside a Poké Ball. Ash brags that Snorlax is in the hands of a good trainer, which Misty replies that she hadn't seen him train it.

Marill plays with Togepi, while Scyther trains itself. They hope Scyther and Charizard don't get in a fight. During the night, Pikachu notices Ash is gone. Ash hopes to know what is the difference between GS and Poké Ball, besides the color. Ash sees Pikachu and invites him to join him. Ash sees the stars here shine brighter and sees his badges. He remembers his challenges with Cissy and Danny and knows whatever the challenge is, he and his Pokémon will be ready and give their best. Misty wakes up and hears Tracey saying to take a sketch, as he is dreaming. However, she and Tracey go back to sleep, as James' Victreebel uses Sleep Powder. As James brags how Victreebel is great and gets gnawed upon Victreebel, Jessie and Meowth place the rope on the Pokémon and pull the lever to get them back. Although they continue (despite some of them being heavy), Scyther cuts the rope and with Charizard makes a roar.

Ash gets warned, while Misty and Tracey wake up. Ash comes and sees the ruckus, as Jessie and James use the rope to come down (but bang in a tree). For saying the motto wrong, Meowth scratches them, but knows they must take the twerps' Pokémon. Jessie sends Arbok and James Weezing. Weezing uses Smokescreen, but Scyther spins, using Swords Dance to gust out the smoke, but gets exhausted. Bulbasaur uses Vine Whip to attack Weezing and Arbok, Squirtle Water Gun to push them away and Pikachu his Thundershock to electrocute them. As Ash goes to announce tackle attack, Charizard uses Flamethrower on Team Rocket. Tracey's Scyther finishes them off using a Skull Bash. When done, Scyther and Charizard stare at each other, then pass by each other. Ash knows this could have gone in a fight, but Tracey thinks this is just respect they have for each other. Next day, the heroes sail on Lapras away. Team Rocket are saddened to be stuck on the island, but think positive, as they don't have to work. Suddenly, Farfetch'd appear and poke Team Rocket using their leaks.

Pikachu points at the island

Ash got hit by a fruit

The Farfetch'd fly away

The fruit is sour

Psyduck came out on its own

Ash tells Charizard to be polite

Scyther and Charizard stare at each other

Snorlax eats the food in one gulp

Team Rocket get poked
Add a photo to this gallery
Retrieved from "https://pokemon.fandom.com/wiki/TB100:_A_Way_Off_Day_Off?oldid=1330335"
Community content is available under CC-BY-SA unless otherwise noted.