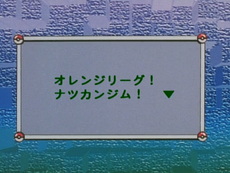 Fit To Be Tide (オレンジリーグ！ナツカンジム！ The Orange League! The Mikan Gym!) is the 5th episode of Pokémon: Indigo League.

Arriving at Mikan Island, Ash goes to fight against the Gym Leader, Cissy. Unexpectedly, there aren't any battles, but challenges. While Ash and Squirtle did their best to break frizbees, the second challenge is a race. While Ash uses his Lapras, Cissy's Blastoise seems stronger and faster. However, an unexpected move from Lapras turns the lead...

As Ash, Misty and Tracey ride Lapras (who is enjoying the travel), Pikachu slips, but Ash gets him before it'd go underwater. Misty tells Lapras they don't need to be in a rush, but she, as well as Ash and Tracey, would like to eat something. Tracey checks there is the Mikan Island, which has the Gym located over there. Hearing this, Ash tells Lapras to go there and they speed up. Jessie overheard them and wants to get before them, but James and Meowth are exhausted from all the pedaling. Jessie clarifies because the blimp was destroyed, they must get the boss a Pokémon. Suddenly, they cannot pedal, as they fall down the bottom of the ocean, as their submarine got wrapped by seaweed.

After their arrival at Mikan Island, Ash calls his Lapras back. At the Center, Ash contacts Oak and greets him. Tracey appears and introduces himself, wanting to meet Oak, while Muk hugs Oak. Ash tells Oak he caught a Lapras. Oak reminds him that it needs care and gets knocked out by Muk. Tracey feels lucky he got friends of Prof. Oak, wanting his opinion on the reviews of the Pokémon Watcher. Ash asks what is his Gym Leader. Tracey responds the Gym Leader is one of the toughest members of Orange Crew, causing Ash to be excited for the match. Ash sees the Gym, but before he goes, he goes to drink milk from a coconut he saw. Taking the coconut, he activates a trap, being soaked by water. A child appears and laughs at him, telling that a trainer falling for that trick is not a good one. Ash tells he competed in the Indigo League, becoming the Top 16. The child tells if he wants to get in the Gym, he needs to battle, to which Ash accepts. However, a woman appears, reminding the child to clean his room.

The child tells he saw the trainer sneaking around. Ash denies this, wanting to challenge the Gym Leader. The woman hears this and introduces herself as Cissy, the Gym Leader. Tracey sees her and makes a drawing of her. Cissy tells Ash to prepare himself to use Water Pokémon, calling him a squirt. Misty laughs at this and the child taunts Ash, but Cissy pushes him away. Ash asks how many Pokémon do they use to battle, but Cissy responds that it is much more than a battle, telling Ash he will see what she means. She tells there will be two challenges. The child presses buttons, causing cans to appear and the pool in the middle of the Gym to appear. Cissy sends Seadra. Ash thinks a Pokémon like that won't win any beauty contests and gets sprayed by water by Seadra itself.

Cissy tells that this challenge requires a Pokémon knowing the Water Gun move. The child blows some bubbles and Seadra pierces them using Water Gun. She tells that the Pokémon need to push the cans using Water Gun. Ash sends Squirtle to do the job. Seadra uses Water Gun and pushes the cans. Squirtle uses Water Gun as well, pushing the cans with relative ease. Psyduck comes out and Misty tells it to get back, but it does not listen. Psyduck uses the GS Ball to play with it, but Misty gets the Ball. The challenge is finished, but Cissy tells the next targets will move. Pressing the buttons, Senta, the child, sends a pack of frisbees, to which Seadra crushes them using Water Gun - all of them. Squirtle does the same and hits all targets. Cissy tells who crushes the next target will win. The target is sent and the Pokémon shoot. The target is destroyed, so Tracey and Cissy confirm they hit at the same time, so the match is a draw.

Senta asks Cissy what will they do, but Cissy knows they need to have a Pokémon Wave Ride. Cissy explains the one who turns around the flag and comes back first wins. Cissy sends Blastoise and Ash Lapras. When Senta is about to fire to start the race, Team Rocket appear, exhausted from being at the bottom of the sea. Ash and Misty see their motto is always the same and never know what they mean by it. James is happy he breaths, as he had to free the submarine from the weed, then get out before running out of air. Meowth tells there is business to do, so James sends James's Weezing, who uses Smog, causing a distraction to get Blastoise for themselves. Team Rocket dive in, but the submarine is (again) wrapped by seaweed. Team Rocket push, but break the pedals. James and Jessie are depressed they won't blast off again, but Meowth has a plan - when a car gets stuck in the mud, it needs a push to get it moving, so the submarine needs to be pushed to float to surface.

However, Blastoise pulls the submarine to the surface and frees itself. Team Rocket go to get more Pokémon, though Pikachu electrocutes them, while Blastoise's Hydro Pump causes them to blast off. With them out of the way, Ash wishes Lapras good luck, but Cissy tells trainers stand on the Pokémon. Ash does not have much balance, but does not want to quit. As they go to the flag, Blastoise pushes Lapras to get Ash off balance. Lapras goes to do the same thing for Blastoise. Blastoise attacks and knocks Ash over, but Lapras gets him before he falls in sea. However, Cissy gets the lead. They turn round the flag and admit to each other they are not bad as they seem. Suddenly, a wave appears, but Lapras uses Ice Beam to freeze it. However, a portion affects Cissy, as she is knocked out, but Blastoise gets her. Ash has an idea, as Lapras uses Ice Beam to the shore and goes on the ice slide. The race is hard, but on the finishing line, Lapras wins.

As Lapras stops, Ash is thrown and banged onto a tree, but is glad he won. Cissy sees his strategy, seeing it was wise to use Ice Beam, seeing he made it far in the Indigo League. She gives him the Coral Eye badge. Ash sees it looks like a shell, but Cissy tells the Orange Islands Gyms use shells as badges. As the heroes ride Lapras, Misty wishes she challenged Cissy to earn a badge like that. Ash tells one needs to be a good Trainer, getting Misty riled up. Tracey calms them down and draws Cissy riding Blastoise. Misty asks Tracey if he was supposed to draw Pokémon, causing him to blush a bit.

"I need to make some observations." - Tracey
"Hey, just what is it you're observing?" - Misty

"Well since you're such a little squirt, let's use Water Pokémon." - Cissy
"Who're you calling "Squirt"?" - Ash
"Squirt! Squirt, squirt, squirt, squirt!" - Senta
"And you'd better be quiet cause you're an even littler squirt." - Cissy

Ash bangs into a tree

Tracey drew Cissy
Add a photo to this gallery
Retrieved from "https://pokemon.fandom.com/wiki/TB087:_Fit_To_Be_Tide?oldid=1334819"
Community content is available under CC-BY-SA unless otherwise noted.