Friends to the End
ポケモンリーグ！さいごのたたかい！

Friends to the End (ポケモンリーグ！さいごのたたかい！ Pokémon League! The Last Battle!) is the 82nd and final episode of Pokémon: Indigo League.

Although the loss of the League weighs heavily on him, Ash, along with his friends, watches Ritchie's fight. Though Ritchie loses, he finds that he is not disappointed at all. To get his confidence, he and Ritchie battle against Team Rocket. Ash finds wisdom, as his hope and dream to be the Pokémon Master continues.

Ash still thinks about his loss at the League, thinking why was he chosen to lose. Oak, Delia, Misty and Brock are waiting for him. Brock says that it is the loss that he thinks about now and does not want to do anything. Misty knows this cannot keep up forever. Misty proposes Ash to get lunch, but he refuses. Misty advises to go for a walk, but Ash still refuses. Misty tells Ash they can get some souvenirs, but he still refuses. Misty tells that he is a baby, making Ash riled up. Ash's mom and Brock go into the room. Ash's mom tells his son Misty wants to help him. Misty tells Ash with all the training they were lucky they made it to the first round. Ash responds she did not battle any of those trainers. Oak tells that using strength and force has gotten him so far, but he could have gone further if he trained his Charizard properly.

Misty tells Pikachu that lazy trainers do not get far. Ash heard that and argues with her. Seeing both sides are stubborn, Pikachu electrocutes everyone. This causes the TV to be turned on, so they see Ritchie will fight in this round. Ritchie tells his Pokémon they need to give their best. Suddenly, the heroes arrive to wish Ritchie luck in the final round. Ritchie tells this fight is for both him and Ash. After some battling, Ritchie faces his final opponent, Assaunta, who uses Ivysaur against Sparky, while the heroes cheer for Ritchie. Ivysaur immediately attacks, using Vine Whip to knock Sparky down. Ivysaur dodges Sparky's ThunderShock, then retaliates using Solar Beam. Sparky stands up from the attack, but gets knocked down by being tackled and defeated. Ritchie holds Sparky, while the heroes see he lost as well.

Ritchie came to a lake and soon Ash appears. Ritchie knows they have more in common and thinks one can learn from losing. Team Rocket see this and think this is an opportunity to get Pikachu. Ritchie knows that he can learn from mistakes and be a better trainer to avoid them. Ash hears these words and sees Ritchie is not disappointed. Ritchie tells Ash they need to promise to each other to be the Pokémon trainers, no matter what. Ash pledges and yells that they are the Pokémon Masters. Suddenly, Sparky and Ash's Pikachu fell in a hole. Ritchie and Ash go to get them, but fall in the hole as well. Team Rocket appear and are glad their traps worked. Ash attempts to go up, but falls down and he, along with Ritchie, fall deeper. Team Rocket take the two Pikachu. They attempt to get out, but the cage is electric-proof.

Team Rocket goes away, but are stopped when Ash and Ritchie go out with their Pidgeotto and Butterfree. Ash sends Bulbasaur to get the cage with Vine Whip, but misses. Weezing uses Smog, but gets blown away back to Team Rocket by Pidgeotto's Gust. Ritchie sends Zippo, while Bulbasaur uses Razor Leaf, freeing the two Pikachu. Using Flamethrower, Zippo ignites the Smog, burning Team Rocket. Pikachu and Sparky use ThunderShock to recharge the cage, while Squirtle's Water Gun douses the fire. Team Rocket catch the cage and due to the electricity, the cage blows, shocking Team Rocket and blasting them off. Ritchie thanks Ash for the rescue, but Ash reminds him they did this together.

Misty and Brock arrive to tell them after the dinner the closing ceremony will be commended. Ash remembers that trainers get special badges for competing in the League. Ritchie tells Ash he can beat him this time, so they all go to the dinner. At the ceremony, the trainers and their Pokémon enter the stadium, greeting all viewers. As the trainers get the badges, Team Rocket dig a tunnel to make trouble. The audience is presented the three winners of the League and everyone claps for them. Before closing, the fireworks are started, making a grand display. Team Rocket dig up and a ball is dropped. Suddenly, it explodes, being a firework explosive and Team Rocket blast off once again.

With a final firework, the flame douses. Next day, Ritchie and Ash conclude that they had a great time, even if they lost. Sparky and Ash's Pikachu come to them. Ritchie greets Pikachu and goes away. Ash reminds him of the promise and Ritchie does not forget it, then leaves. Ash remembers his time at the League and says to Pikachu they will train harder. Seeing Professor Oak, Misty, Brock and his mom, he goes with them back to Pallet Town. 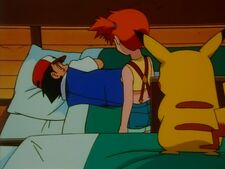 Misty attempts to cheer Ash up 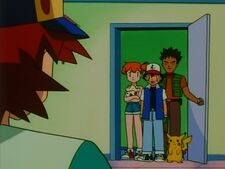 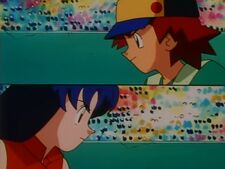 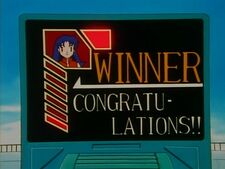 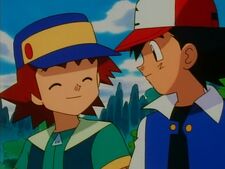 Ash sees Ritchie is not disappointed 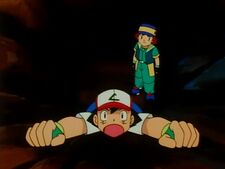 Ash fails to climb up 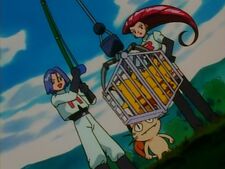 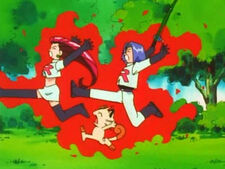 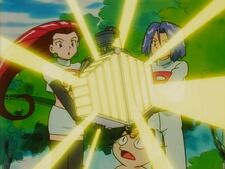 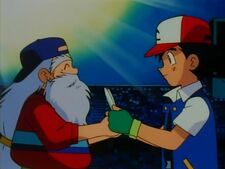 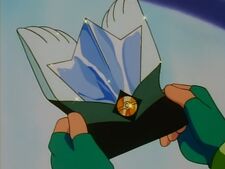 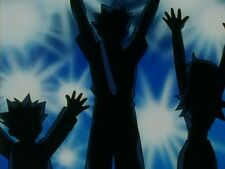 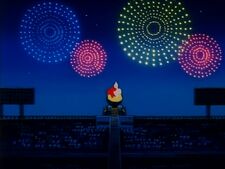 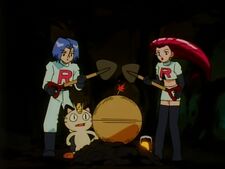 Team Rocket got a firework ball 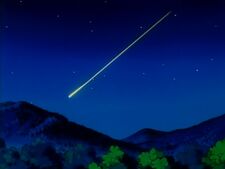 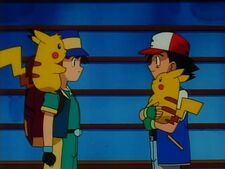 Ash and Ritchie say goodbye to each other 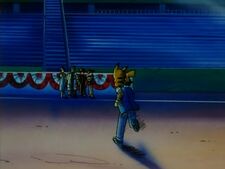 Ash goes to Pallet Town
Add a photo to this gallery
Retrieved from "https://pokemon.fandom.com/wiki/TB082:_Friends_to_the_End?oldid=1290465"
Community content is available under CC-BY-SA unless otherwise noted.